The Next Step in Harper Exploitation

First, there was Bowman.

Tomorrow, Pro Debut is supposed to hit shelves. Then, Bowman Platinum. While Bryce Harper doesn't appear on the Pro Debut initial checklists, I'm sure he'll be in there somewhere; he's already on the Platinum sell sheets.

If you don't have enough Bryce Harpers by the end of June, just wait three months. In September, you'll have another shot at Harpermania. So what will Topps bring us then?

Why, it's Topps Heritage, the Minor League edition! Beckett announced the details today. 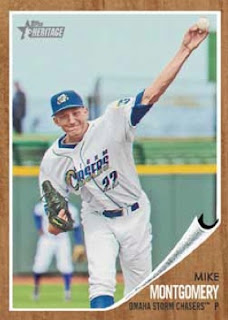 I really don't care about this set. Rookies are young, hot, cutting edge. Heritage is old, vintage, reminiscing about veteran players and being a kid. I'd rather see them make a new design for a second minor league set - Pro Debut copies the major league flagship as well. What's next? Topps Tribute Minor League? Bowman Minor League? 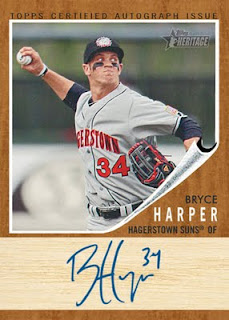 Nice try, but that isn't attractive. At least the autograph appears to be on-card. 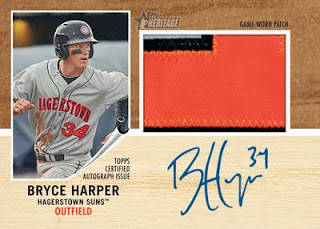 That looks better. But again, it's minor leaguers! And by the way, this is a one-of-one. Any of the other (very limited) Harper relics will be from a base used at his first game.

There are blue, red, and green tint variations of the base set, as well as black parallels. The autographs and relics are following the same parallel concept. It appears that there won't be any inserts to accompany the 200 card set, but 50 of the cards will be short-printed all-stars. 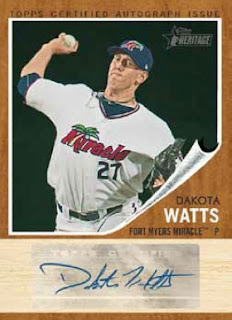 Remember how those Harper autographs were on-card? Well lookie here. Stickers. Is it that hard to travel to minor league stadiums and make the players sign the cards? Heck, pay me and I'll do it. 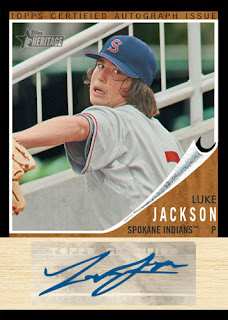 Here's a sample of the black autograph parallel. Another sticker.

I'm not into prospecting, and unless hobby boxes drop below $30 or someone sells their cards cheap, I'll wait a couple years and scoop up the cards I want when the players go bust.

Topps, please do something special with your MiLB license. Porting your MLB releases to the farm just doesn't interest me.
at 3:08 PM