Hats Off To Me

A couple years ago, I went through all of the accumulated stuff from my life here in Japan, and made some decisions about what I wanted to keep versus what I didn't really want to keep. Some of it was worthless and is now in a landfill or properly recycled, while other things are in boxes waiting to be sold in some way.

Don't worry, I kept most of the baseball stuff, at least. And last year, while I was cooped up in my tiny apartment, I went back through the boxes to photograph and catalog everything I kept. While organizing and inventorying the baseball souvenirs, I verified that I had at least one, but not too many, souvenirs from each NPB team. And that got me thinking: what if I had one souvenir for every defunct NPB team as well? That includes a few teams that have disappeared, but also teams which have changed their names.

If my research and memory is correct, this is a list of all NPB team names which no longer exist:

Somewhere along the line I picked up a BlueWave souvenir. They aren't that uncommon - the team existed less than 20 years ago and was the home of Ichiro before he moved to Seattle.

Last month, I finally got a Braves souvenir. 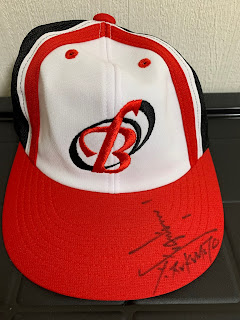 The easiest thing to find for the Hankyu Braves, other than cards, are hats. But most sellers have been asking more than I want to pay. This only cost me about 1000 yen ($10)! It's big enough to fit on a shelf but not too big to dominate it. I believe this is vintage. 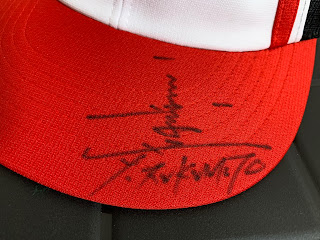 Oh, you noticed a signature. I'm pretty sure this is Yutaka Fukumoto, the Japanese Rickey Henderson. Or should I say, Rickey Henderson is the American Yutaka Fukumoto. Fukumoto broke Brock's career steals record before Henderson, and held the single-season stolen base record with 106 before Henderson broke that record. Fukumoto got 2543 hits and 1065 stolen bases in his career, and is a member of the Japanese Baseball Hall of Fame.

I didn't bid on it because Fukumoto signed it, but if this is authentic (I have no reason to believe otherwise) it's a great addition to my collection and my first Japanese Hall of Famer autograph. (Apparently, the seller's kid got the hat signed at Nishinomiya Stadium.)

I'm pretty sure I'll be able to find decent souvenirs eventually for the Orions, Flyers, and Whales. But the remaining teams only existed in the 1950s, so I might turn to replicas or other modern souvenirs.

And as a bonus, these bromide photo cards of Fukumoto were included with the hat: 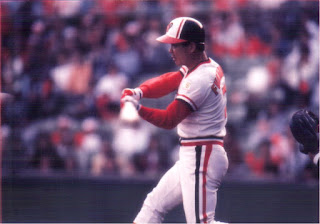 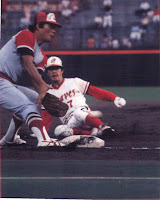 I'm taking a stab in the dark here guessing they were probably sold at the stadium.