If you look back at my post history, in April 2020 I made a series of posts of unknown Japanese cards. These are cards that aren't catalogued in Engel's guides (as far as I can tell) and I can't identify on my own. For modern cards where I know the issuer (usually for team cards), I can usually narrow down the years a bit, but without knowing the exact year I leave them as unidentified.

I don't think I've found any new "lost children" after that, until earlier this month, when I got a couple little packages in the mail. 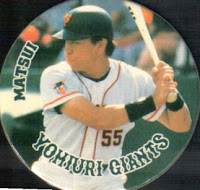 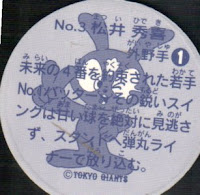 This little POG-sized disc may be just that - a POG. It carries the Tokyo Giants copyright but no other logos or trademarks, so it might have been a team issue. Here is Hideki Matsui, who is number 3 in the set. 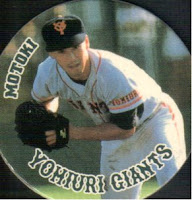 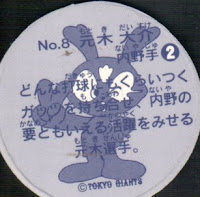 And this is Daisuke Motoki, card number 8. The players also appear to be ranked by position - Matsui is the number one outfielder, and Motoki is the number two infielder. I suppose.

The text on the back talks about how great the player is. Matsui's card talks about his sweet swing and hitting line drives into the stands, and that he is expected to be the Giants cleanup hitter (if I am translating correctly). Given that it talks about him as a young player and eventually being the cleanup hitter, this could be a 1994 or early 1995 issue (Matsui would first bat cleanup for the Giants in August 1995, according to his Japanese Wikipedia page). 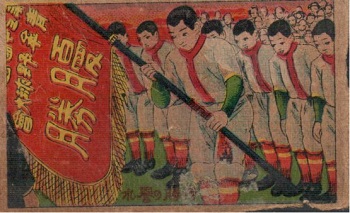 Here's an old menko for you. I can't read all the kanji at the top of the flag, though the big text seems to say Victory. There is also text at the bottom, but I can't make that out now either. 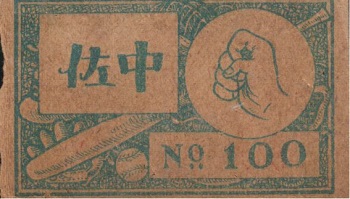 The text in the box says Sanaka. I haven't been able to identify any menko with this back design in Engel's guide, though Sanaka appears a few times for other sets. It's possible this card comes from a set of "generic" baseball menko. Or maybe the kanji I haven't translated gives a bigger clue as to a particular team represented on the front. It could be related to a specific baseball tournament as well.