It's A Big One! 1958 Fujiya Signature Premium with Printed Name

Japan went through a card boom of sorts in the 1950s and early 1960s. While there was no set issued similar to what Bowman and Topps were doing, many companies issued game cards, "bromide" photo cards, or cards to be inserted into gum or other food products. I guess you could say it was similar to the card situation in the US in the 1900s through the 1920s.

Some of those issues came with larger premium prize cards. Most used the same design as regular cards, just in a larger size, but because they were prizes, they are much more difficult to find. 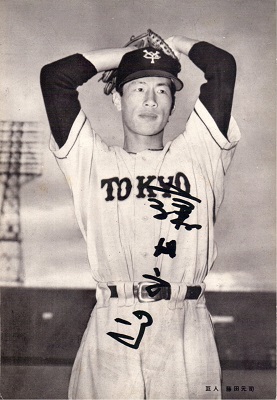 This card is an example of one of those premiums. Fujiya Caramel issued a small-size card set in 1958 along with several different premium large-sized sets. This is JF 24b, which has the team and player name printed at the bottom along with a facsimile signature. The backs are blank. Measuring about 5" x 7-1/2, this was definitely not found inside individual packs of candy. While I have no idea exactly how they were distributed, my guess is candy packs had regular cards inside or accompanying them, with winning cards or tickets randomly inserted, to be redeemed at the shops. A color set of premium cards is known to have been distributed in envelopes, so these might have been similarly packaged.

If you're wondering, the player is Motoshi Fujita, who played his entire career with the Yomiuri Giants. This would have been issued just after his ROY-winning rookie year, and during his first of two consecutive MVP seasons. Fujita would go on to manage the Giants for two stints totalling seven years in the 1980s to early 1990s. He won two Japan Series titles as a player and two as a manager, posting a nice 2.20 ERA on the mound.