It's Just a T-Shirt

There aren't many American cards I don't know about. I don't mean I've memorized my 2008 Standard Catalog of Baseball Cards from cover to cover, and I can't tell you how many cards were in the 1952 Topps set, and honestly the 1990 Donruss set just has way too many meaningless variations. But I know how to find information about sets, cards, and players pretty easily using the multitude of resources available to me. (And I have at least flipped through every page of the Beckett Almanac I bought back in 2003.)

Japan is a different question. You must think I'm a broken record when I talk about this, and it's definitely become a cliché on this blog. But even for modern sets issued by major manufacturer BBM, there just is no comprehensive guide out there. So I was a little surprised to see this card pop up on Yahoo Japan Auctions: 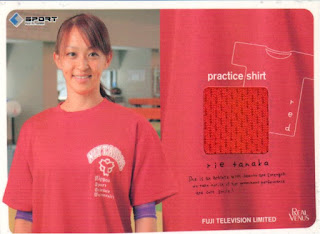 Rie Tanaka is perhaps the most famous Japanese female gymnast in the past 20 years. She's certainly the most popular. She has appeared in several of BBM's Real Venus sets and even had her own box set issued in 2013. I don't know of any other gymnast who has received their own full set. 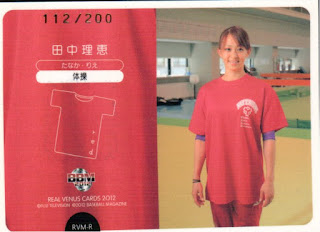 This card features a piece of cloth cut from a t-shirt she wore inside a gymnasium. I'm pretty sure she just wore it for the photo, though it comes from the university where she used to teach. It is identified as a "practice shirt", but how often do gymnasts practice routines in t-shirts? Perhaps it was worn during workouts or warm-ups.

The card itself is from the 2012 BBM Real Venus set, but wasn't included in packs. Instead, it is a "Fuji Television Limited" card. I have no clue how it was distributed, nor have I tried to find out. I know there was at least one other year where promotional memorabilia cards were issued. I should note that Real Venus has no memorabilia cards in the regular packs.

This card is numbered 112/200, and has card number RVM-R. There is a patch version numbered out of 20 copies, using the logo found on the front. It is possible there are more promo relic cards out there that I don't know about. But if there are, I don't know about them.

Did I make you laugh?

This isn't my first Rie Tanaka relic card, nor my first Tanaka shirt relic card. The 2013 box set included several relics, and I've found a black shirt, a blue shirt, and a leotard from that issue. There's also a towel and another leotard relic I'm on the lookout for.