My Most Expensive Minor League Card

I have several player collections, but keeping up with them isn't too tough, because most of them are just Topps flagship base cards. But I have put together a few more comprehensive collections.

Michael Jordan is known more for his actions with an orange ball than a white one, but at some point I decided to put together a full collection of all of his base and insert baseball cards. That collection isn't quite finished, but the last "hit" is in the books: 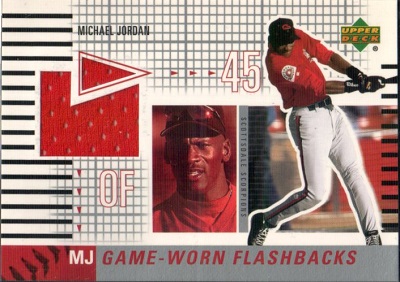 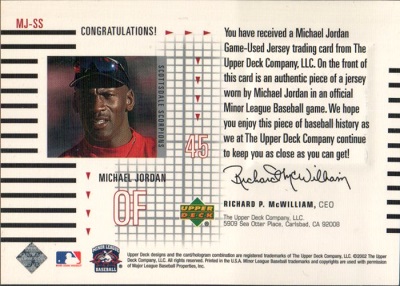 This card from 2002 Upper Deck Minor League has a piece of his jersey with the Scottsdale Scorpions. I picked up a bat relic pretty early on in my quest to find all of Jordan's baseball cards, but jerseys have been more elusive. All that's left are a few 1994 inserts (which won't come cheap, I think) and one of those Upper Deck 20th Anniversary cards from 2009. This year, I hope!