My tastes are eclectic. I could write a couple 500-word essays worth of background to tell you all about it, but I'll spare you the pain. But one thing I do like in addition to card collecting is riding roller coasters.

I've ridden 652 coasters in 172 parks across 13 countries. 596 of those "count" as coasters, with the rest being powered, mountain, water, or undefined coasters. At least 147 of those are no longer operating. (Oh, and in case you're wondering, there's an app for that. There's no way I'm keeping up with all that data.)

I've amassed a decent collection of theme park souvenirs: shot glasses, keychains, magnets, and so on. But until now, I never had my own coaster train.

Okay, so it's a toy. Tomica is the Japanese equivalent to Hot Wheels, and may be even higher quality. They generally make regular cars, trucks, and buses, but they do have some unique items in their product line. One of those is item 123, the Fujikyu Highland Do-Dodonpa coaster. 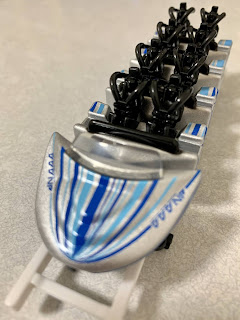 Do-Dodonpa is one of the signature rides at Fujikyu, which is considered by many to be the best amusement park in Japan.

Side note: Disneyland or DisneySea is considered to be the best theme park in Japan, but Fujikyu is considered to be the best amusement park due to its selection of unique thrill rides. Think of it like a Japanese Cedar Point. Except I believe Nagashima Spaland is a much better park than Fujikyu; Fujikyu has some amazing rides but Nagashima Spaland has a better overall experience.

The detail is pretty good. I wish the people weren't all the same color as the seats. Most of the paint is already applied, but the box came with a set of tiny stickers to put on the trains where the steps and the top next to the seats are. I used a pair of tweezers and some other random nail tool to help me apply them properly.

The train can roll on the very short piece of track or be taken off completely. Each car in the train can spin completely independently of the other cars. And you can't see it in the picture, but the bottom of the train has brake fins and this track piece has brakes. It's a nice touch. In case you're wondering, the bottom wheels spin, though the top and side wheels do not.

I would like a real piece of a coaster someday. Owning a coaster car is probably unlikely, but a piece of track (replaced, of course) or an old wheel would be neat. I have a piece of the Golden Gate Bridge, after all, it can't be too tough to get a roller coaster piece, can it?