Slowly But Surely, A Set Moves Closer to Completion

Pick a regular card from a major card company from 1952 onward. A Topps card will most likely be your choice, but Donruss, Score, Fleer, Upper Deck, Bowman, Sportsflics, Ted Williams Card Company. Any of those can probably be found right now. Almost every one of them is on eBay or can be found on Sportlots or COMC. (I said regular card. Don't bring up the 1990 Topps George W Bush card.) I'm sure there's a 1952 Mickey Mantle out there, and if there isn't, it's probably available in a big auction sometime in the next month or two.

Now try to find Japanese singles, especially from pre-2001. It gets a lot more difficult. There are regular-issue sets from even 10 years ago that can be really tough to find. I'm two cards away from finishing the 2008 Calbee set, but those two cards seem to have never been issued. (They have, I just can't find them for sale now.) Card shops usually carry minimal inventory, and other online resources are limited almost exclusively to Yahoo! Japan Auctions. There is no COMC or Sportlots here. Japanese people generally don't use eBay (which is why YJA still exists.)

The 1995 BBM set is one of the toughest to finish. There are several short-printed subsets and a high-number update series which makes one team's (and several other players') cards short-printed.

I have picked up a few cards to get me closer to a full set. In fact, I'm pretty close to finishing the regular set without the high numbers. 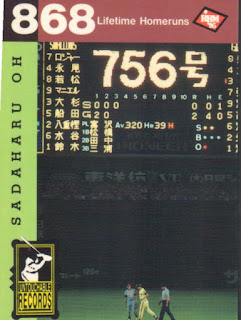 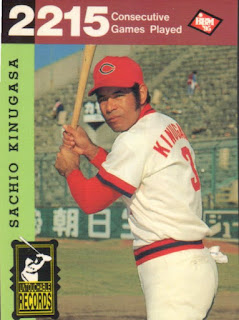 First, I finished off the Untouchable Records subset with these two cards.

Next, there were two four cards from the Then and Now subset I needed.

I managed to get all four together along with some extras. 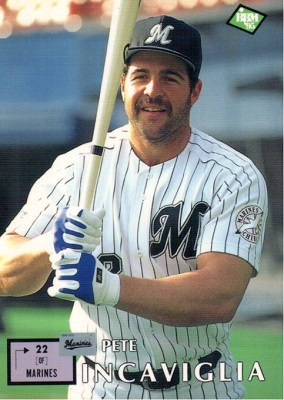 Do you remember Pete Incaviglia? He managed to hit 206 home runs over 12 seasons with six teams. He spent the 1995 season with the Chiba Lotte Marines, and as such ended up on this high-series card. 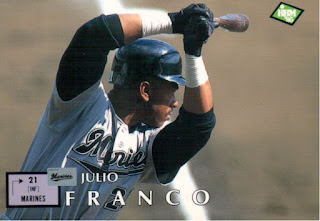 Another former MLBer is Julio Franco, who also was with the Marines in 1995 and thus ended up in the high series.

With these cards obtained over the past six weeks or so, I now need just four regular-series cards (including one Ichiro puzzle subset card) and nine high number cards! It would be awesome to finish this set this year, but those high numbers are a doozy.