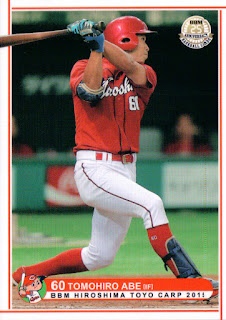 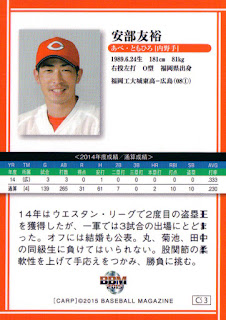 Continuing our march through BBM's 2015 team sets, the Carp set might be my favorite design for the year. It's simple and linear, but not symmetrical. BBM seems to have standardized the team set size, at 81 cards for a full base set There are 69 player cards and one mascot for the regular cards in the Carp set. 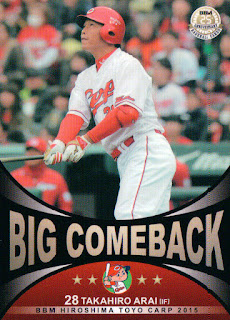 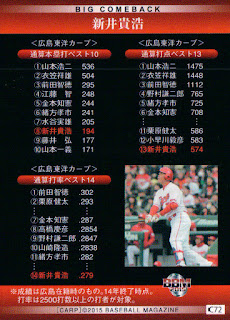 The first subset is only two cards, titled Big Comeback. If you didn't know that Hiroki Kuroda was back with the Carp this year, you can read all about it on his card. But I only have Takahiro Arai. 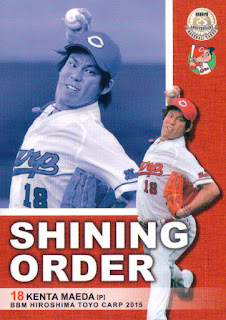 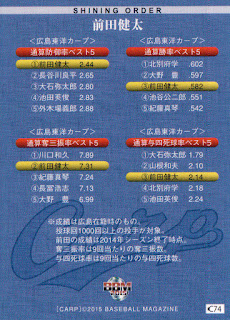 The last nine cards is the Shining Order subset. It's not really a "batting" order because there are three pitchers in there. But it shows the pictured player's statistics compared to his teammates. I again want to commend BBM for the inclusion of statistics on both subsets here.

My scanner doesn't like the front of the first insert set, Contenders. There are nine cards in this horizontally-oriented set. Unlike the subsets, BBM's inserts continue to have no explanation of what makes these players worthy of being on a premium insert. This set uses a silver-ish foil, though it came out green in my scan. 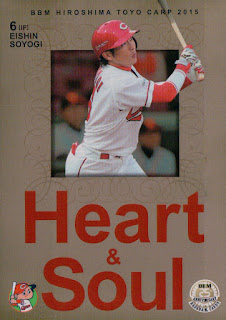 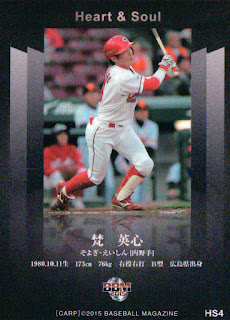 Heart & Soul is the "gold" foil insert set, though the scan doesn't show it here either. I think these look better though again there's no purpose other than the "added value" of a limited card in packs. 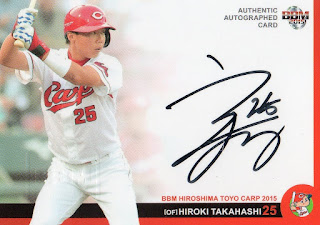 There is an interesting situation with the autographed cards for the Carp. As usual, pretty much the entire roster signed cards for the set, but there are both on-card and sticker autographs. Some players have only hard-signed cards (up to 60 copies each), sticker signatures (up to 90 copies each), or a combination of both (no more than 90 copies total between the two). Players with both on-card and sticker signatures are serial numbered separately.

I couldn't find any examples of the premium autographs, but they are about the same as others (see yesterday's Fighters post) and all use sticker autographs.