Today and tomorrow's posts will bring me up-to-date on card scans through the end of May! Amazing, huh? Then I've just got the hundreds of scans from my trip to the US (a couple years of trades and purchases there) and cards I've bought since returning... 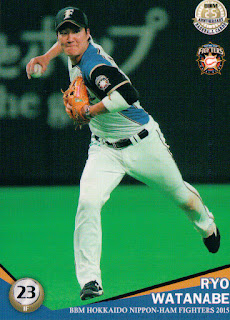 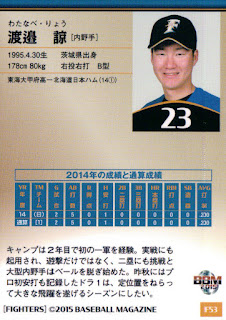 The Fighters set was released at the end of May, and I got my type collection singles right before flying back to the States. The design is the same as always. Should we expect anything else from BBM's team sets? In other words, there rally isn't much to say here.

However, this is the first time I've noticed the hyphen labeling the team as the Nippon-Ham Fighters, not just the Nippon Ham Fighters. That isn't to say BBM hasn't used it before - a quick check shows that it's been on cards since at least 2006 (I didn't bother earlier than that... a decade is enough). Given the number of times the team is referred to as the Ham Fighters, how did I go that long without seeing it? Nippon Ham is a food company here that most notably for me makes decent toaster oven pizzas.

The base set is complete at 81 cards. There are 71 regular cards, plus one checklist and three small subsets. 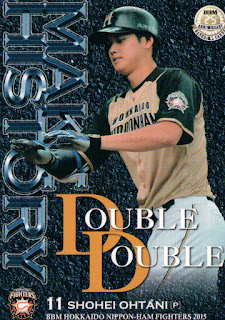 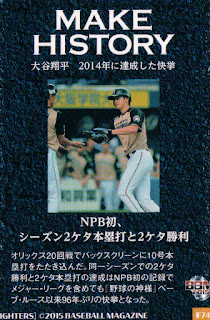 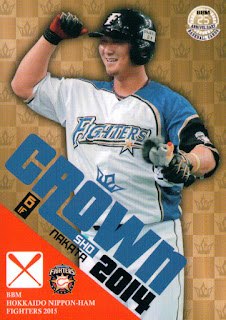 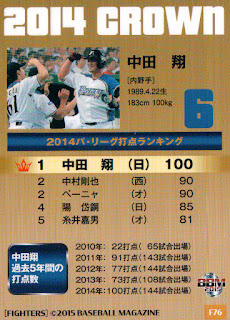 Next is 2014 Crown. The three players on these cards led the league in various categories. 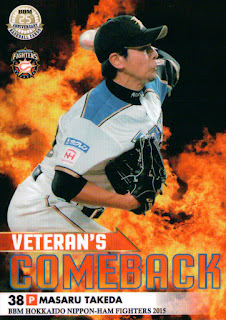 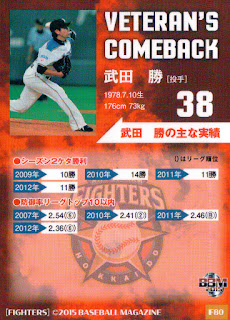 Finally, Veteran's Comeback is exactly what it means - veteran players making a comeback. 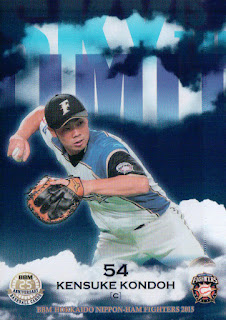 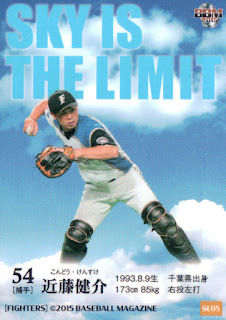 Like BBM's other team sets, there are multiple insert sets found in packs this year. The "silver" insert set is titled Sky Is The Limit. There are nine cards with a nice cloud background.

The gold insert set, which is more rare, is titled Game Changer. This set also has nine cards in a horizontal format with the team's biggest players.There are players who appear in both insert sets (ahem, Shohei Ohtani).

There are several different autograph types in the Fighters set: 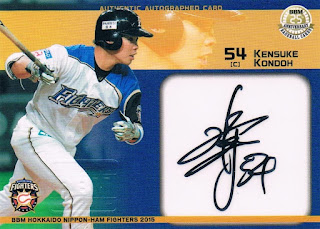 The usual horizontal autographs are found for all 71 subjects in the base set. The print run is 30-60 copies per player. 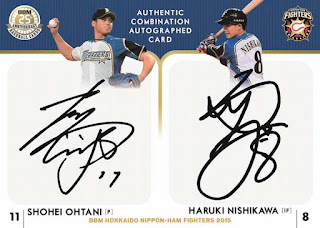 Combo autographs are limited to a print run of only three copies each, and there are three different cards. Vertical autograph cards are found in silver and gold versions. Most silver cards have a print run of 15. There are two Ohtani cards both limited to five copies. Gold versions are 1/1, though again Ohtani has both a pitching and batting card.

Finally, the Fighters have three cards in the cross brand Cross Sign set, serial numbered to 30 each.
at 3:00 AM