This is NOT a baseball card: Better eat your Wheaties!

Anyone remember that commercial? The slogan was a big catchphrase among people I hung out with when I was younger. We also danced along to MC Hammer and dreamed of being the next Vanilla Ice.
I never ate my Wheaties, though. So instead of playing baseball, I watch it and collect it. If only I didn't have such an affinity for Cocoa Pebbles and Peanut Butter Crunch. Remember Peanut Butter Crunch? That stuff tore the roof off the top of your mouth, but boy was it good. Occasionally I'd buy a different Post cereal when I saw baseball cards on/in the boxes, but I never kept the cereal boxes themselves.
These days when I go to the supermarket I pass by the cereal aisle and check out the Wheaties box. Usually it's one I don't care for, but occasionally I find a good baseball one. After the Olympics, I sometimes luck into a medalist box. A couple weeks ago, I saw this one: 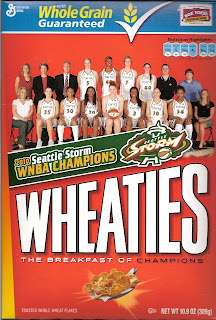 I wonder how many of them eat their Wheaties. Is this the first WNBA Wheaties box? There is a list of Wheaties boxes on Wikipedia, but it is labeled as incomplete. There are only three baseball teams listed ('87 Twins, '95 Indians, '04 Red Sox). This box is there only because I just added it. My first Wikipedia edit. Hope I didn't screw it up. Looks okay...

I already showed this to you, but I'm showing it again, since it's related: 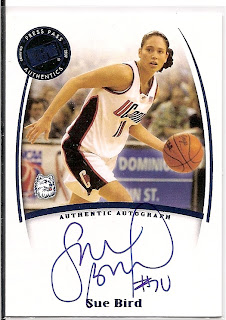 Timing is everything, I suppose. I know there were mini collectible Wheaties boxes, but I think it would be cool to have a card set reproducing all the Wheaties boxes. I understand there's around 500 different boxes (or more). This isn't my first Women in Sports Wheaties box, because I have a few of the Olympics ones.
at 4:54 PM

Labels: NOT a baseball card, Women in Sports