Two weeks ago (wow, I've been lazy) I went on a crazy flea market run over two days. A couple decades ago, I sold a large amount of my extras at a flea market, back when Topps Gold, Donruss Elite inserts, and the Upper Deck SP cards were the hottest cards you could have in your case. I was able to walk through the rest of the flea market and turn my paper back into cardboard through several other dealers. My experiences with flea markets in the recent past haven't been that good, mainly because all the flea markets in Georgia generally contained the same stuff - new cheap merchandise sold by Chinese and Hispanic dealers. They're good if you need cheap booty pants or a $1 belt, or perhaps some plastic kitchen utensils or garbage batteries, but as far as trading cards go, well, they don't. Moving here to San Francisco, I visited the Berryessa Flea Market but saw the same stuff I saw in Georgia, so I wrote off the fleas as a source of cheap cardboard. Along came Fuji, who has written about his flea market finds at some locations I didn't even know about.
I did a little research that uncovered some other flea markets with possibilities, and put together a plan that involved a local road trip over a weekend that saw me stop at several previously-uncharted locations.
I don't know how I did it, but I was up by six and took public transit to my first destination, a weekly flea market held at the Ashby BART station, arriving by eight. There were a few dealers there, a couple more setting up. I guess I arrived a little early, or perhaps it just wasn't as good as I had read. I left empty-handed within five minutes, but I wasn't terribly disappointed, because I didn't have high hopes for this location.
I hopped back on BART to another location that I thought had a flea market, but it turns out I was a day early, so I headed back towards home to pick up the car for the long loop I had planned for the afternoon.
My next stop was on the peninsula at a monthly flea market held at Palo Alto High School. This flea market is more like what I expected - a large collection of garage sales and craft-mongers. I saw a couple dealers selling some baseball novelties, and picked up a few (you'll see them later), but it wasn't until I reached a corner of the longest path that I found worthy cardboard. 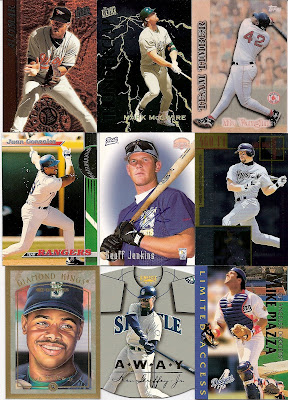 I grabbed these cards for about $5 combined. Most of the money ($3) went towards those Griffeys on the bottom row. I also somehow picked up a football card (I think I got things mixed up). All the non-Griffeys were 25c each, including that certified autograph in the middle.

I also picked up these beautiful 8x10s for 25c each. They're not mint - most of them have dinged corners - but I figure for a quarter each I can toss them in a frame, maybe with a relic, and make a nice display. 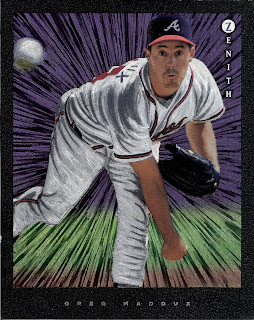 Maddux and Chipper need to be added to my player collections. I'm not sure how I overlooked the two most important players in the Braves franchise through the '90s. 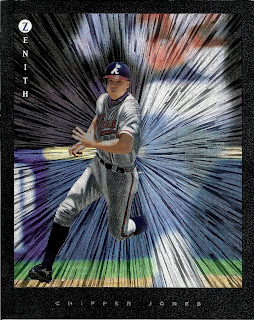 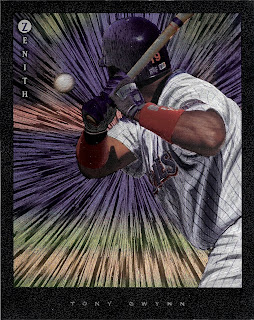 Double vision! You can see the difference here between the Dufex version above, and the regular version below. I think the full photo card below looks better, without the crazy shiny "dufex" technology. By the way, these cards are from 1997 Zenith, a Pinnacle set issued in large packs. Each pack contained an 8x10, either the regular type or Dufex, along with some regular-sized cards. 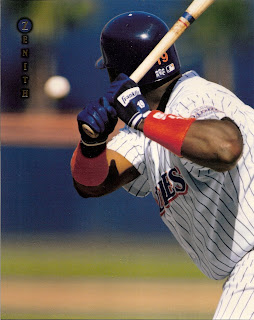 The dealer said he's there every month and usually has new stuff every time, so I'll have to go back. I might pick up more of these 8x10s while I'm at it. I picked up a bunch of non-card baseball stuff too, which you'll see later.

A few tables down from the above guy, a woman had a table set up with what looked like all the stuff her kids didn't want anymore from the '80s and '90s, including a bunch of baseball cards. There was a shoebox with a pile of cards in it, and most of the cards were along the lines of '88 Donruss. She wanted a buck per card, and there wasn't much in there worth a nickel, let alone a dollar. I found one gem in the pile:
Okay, so for a buck I got a card that I could have found a worthy replacement through Sportlots or COMC for 20 cents, but hey, I don't have to search online, and I help out some poor 40-something upper-middle-class woman sell her junk.

After enjoying a hot dog and Coke sold by the high school band (the flea market supports their program), it was time to cross the bay to another school.

Ohlone College advertises on Craigslist (here is their current post as of this writing) that they have baseball cards. Well, not really. Maybe the card dealer wasn't there, or maybe the odd small stack of late-80's junk commons were what they were talking about. The long drive to this location was a bust - really, my third strike of the day - but I was able to get a look at everything else they sold. I saw plenty of jewelry and storage unit finds, and at least one dealer with coins. As advertised, the food seemed to be pretty good, but I already had lunch, so I didn't try any of the food. For the first time that day, I was charged admission: $2 to park. I grabbed a couple cheap non-card souvenirs along the way around the tables and headed off to my last location for the day.

Last fall, I made a circuit around the bay area, visiting all the card stores I could find through Google Maps. It seems I missed one. Talkin' Baseball, in Danville, is located on the second floor of a strip mall right off the freeway. I'm planning a post on bay area card stores at some point, so I won't give all my thoughts now, but I will show the card purchases I made: 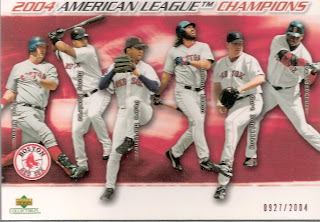 This card is blurry because it came sealed in a case and I'm not about to try to figure out how to open it. I also don't know exactly what set it's from (or should I say, what name this is in the Beckett database so I can catalog it in my collection, since I'm sure it was issued as a single card). 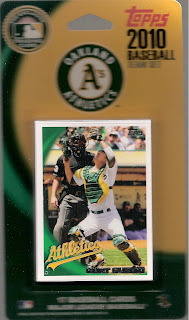 Hey, team set! More blurriness - you can see what happens when you try to scan in 3D.
That concluded my long Saturday trip. Sunday would be shorter, but better.
My first stop was a local weekly flea market here in San Francisco. It's held on Sundays at the Farmers Market off of Alemany, and there are several collectibles dealers in addition to standard flea market finds. There was one baseball card "dealer" with moderately-overpriced junk wax, but I found this at another guy's table: 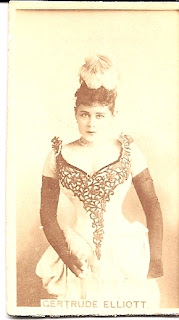 Gertrude Elliott was a turn-of-the-century actress, and she's seen here on an outstanding tobacco card. I should have scanned the back - it's a Sweet Caporal with the advertising upside down. Other than some usual wear-and-tear, this is my best example of a tobacco card. I have some other non-sport cards, but not in as good a condition as this. We're talking PSA 4, folks! (I don't know what I'm talking about. Don't mind me.) Certainly a great addition to my collection at... a buck!
I understand that several of the antiques and collectibles dealers who set up at this market abandon it for the bigger Alameda monthly fair at the beginning of the month. Keep this in mind if you plan on visiting. Also keep in mind that as far as baseball cards go, this is hit-or-miss.
I hopped a BART train back across the bay to try my luck at the seedy Laney College flea market, which is Sundays only. If your bike is stolen in the bay area (especially Oakland, Berkeley or SF), come here early Sunday morning and steal it back. It will be here, I almost guarantee it. This place can be downright scary. I've walked the streets of Harlem and Brooklyn at night. I've driven down 8 Mile Road and through the worst parts of Detroit. I've been in the St. Louis ghettos. Trust me, this is not the safest place to be. Did I really feel threatened ever? No. Did someone steal my stuff? No. But looking around you know this stuff only came from theft or purchased storage units. Brand new Hollister shirts for $12 each? You can find them here. There are two sides to this flea market, the registered and unregistered sides; you pay $1 to get into the registered side. There isn't much of a difference between sides, so save your buck. In fact, save all your money and avoid this place all together. I did make one awesome non-card find, but you'll hear about that later.
It was time to get back to the car and make my last flea market stop of the week. Fuji lives in the south bay, and visits the San Jose flea markets. There are three he talks about: Berryessa (boring!), DeAnza (gotta wait til the first weekend of the month to try it), and Capitol. As he says, if you're looking for stained stuffed animals, dirty old shoes, or somebody's old crap, you're in luck. There are reserved spots, so there are usual dealers who show up every day (and it's a full-time job, as this flea market is open several days every week), but many of the sellers show up at butt-crack of dawn to fight for a spot to sell junk. I saw several Mexicans spread out in spots around the market with giant blue tarps covered in household stuff. I got lucky with one of those and found something you'll see later (is the suspense killing you yet?), but after a lot of walking in the hot sun I finally came across a card dealer. 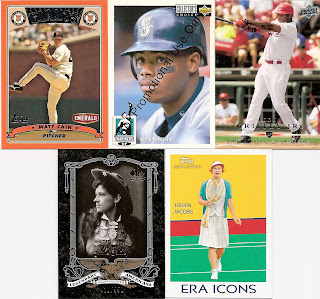 I found a food issue, promo, and some inserts of non-sporters. I think the Griffey non-promo actually went with the High School lot the day before (everything got mixed up at some point). 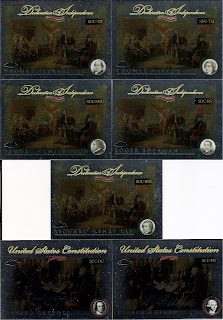 I prefer the non-chrome version of these cards, but all these go towards completing both sets. 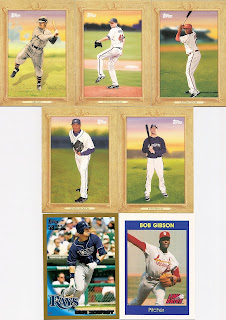 The Turkey Reds are from 2010, and they'll get me a little closer to finishing that insert set. Again, the Zobrist gold card and Bob Gibson card probably were bought on Saturday.

But you'll forget everything I wrote when you see this next card. In fact, you probably haven't even read this text because you're staring at the pretty woman. Aren't you! The first person to correctly name her will win a prize! 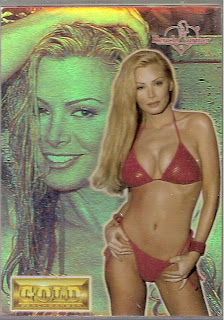 The guy who sold me the baseball cards today had a few non-sport sets (and other sports as well). He said he used to own a store, but it looks like he still buys cards, since he had the 2010 stuff. I picked up one more thing from him as part of my overall purchase: a team-bagged lot of minis. I knew when I bought the stack I was getting about 20 minis, and I assumed they were all A&G. Well, they were all A&G, mostly from 2006. The highlight: Danica Patrick '06 mini! They're all trade-pending right now, but may come back later.
at 3:53 PM