It's the weekend! These days, that just means I'll be chilling out in the neighborhood. Hopefully I can crank out a bunch of posts at once instead of trying to write these as I fall asleep. I kid you not. After uploading all the pictures below, I closed my eyes for a second, and woke up when a reminder alarm went off on my phone. 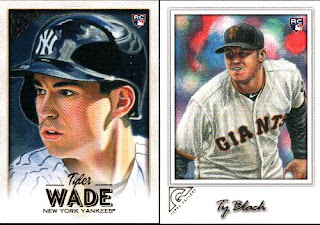 We'll kick off with two Topps Gallery rookies. I do love me some Gallery! I guess I should look into getting the 2021 set. Tyler Wade is a keeper for the Archives. 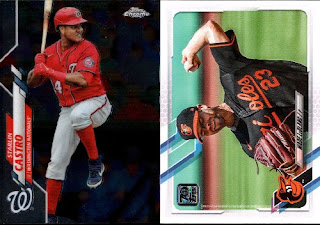 Castro and LeBlanc have been around for quite a while. I remember when Castro was doing pretty well in Chicago, though neither have really become stars. Unfortunately, I don't need either of these cards. 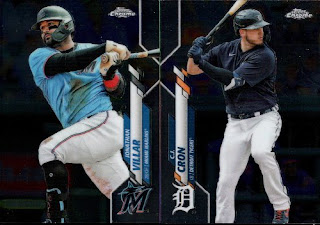 More Chrome. I've always felt that Chrome base cards just don't look good. The scanner doesn't do a good job of picking up the backgrounds, but the extremely blurry backgrounds don't really show up in person, either. A sharper background in the Chrome cards might make these more attractive. Villar is a need in my Archives collection. 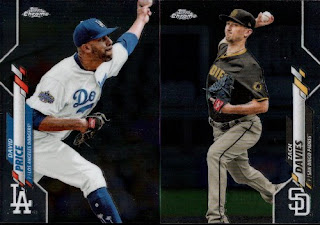 Continuing my rant, Chrome cards look much nicer in refractor form, but with a sharper background may be even better. It's the vibrant backgrounds in Finest that I really enjoy as refractors. Davies was a part of the no-hitter shenanigans this year, so he's off to my Awards collection. 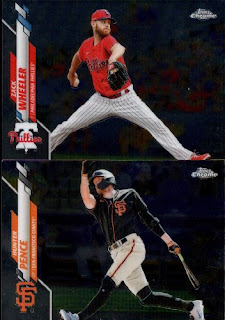 Two horizontal cards. Hunter Pence has been seen before, but not Wheeler. This is my first card of his other than complete sets, so he's off to the Archives! 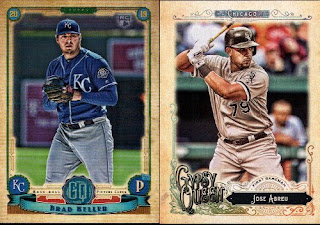 Okay, let's go Gypsy Queen again. The backgrounds on GQ are much easier to see - the ads on the wall behind Keller, the dugout, players and fans behind Abreu. They aren't in focus, but there is contrast and definition.  And both of these cards are off to the Archives. 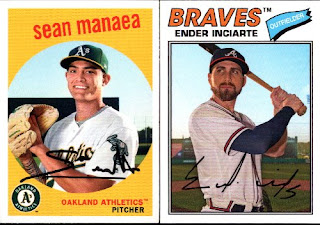 Sean Manaea? Do you remember him? I don't, even being a (detached) A's fan, and he having thrown a no-hitter in 2018. He is still playing for Oakland, too. Inciarte I've heard of, and I need that card. Here's an interesting note. The back of Inciarte's card has a small cartoon which states, "Barry Bonds HR'd on April 13 in five straight years." While that is an interesting bit of trivia, what really piqued my interest is that my mother's birthday is April 13th. 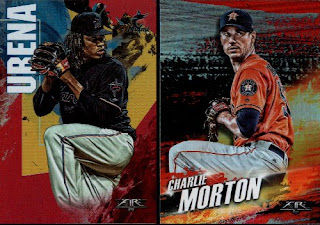 Did you know Charlie Morton is the second Charlie Morton to play in the Major Leagues? Charlie Morton played 88 games over four seasons from 1882-1885 and also managed for two of those years; he was involved in a decent bit of early baseball history. This Charlie Morton, though, is a needed card for the Archives. Urena is not. 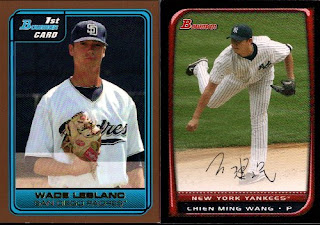 Another Wade LeBlanc? Do you remember Bowman Chunks cards? These are relic card-thickness parallels used to trick pack searchers. Nowadays, companies just stick blank cards in there. Those blank cards are pretty neat, though. Chien Ming Wang had a long career, and now coaches in the CPBL. 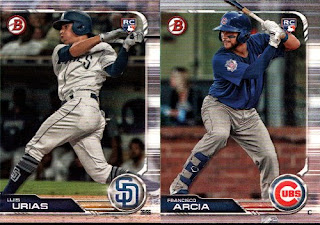 Both of these guys made their debut in 2018 (hence the RC logo on these 2019 Bowmans). Arcia is a needed card. 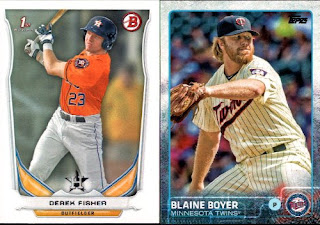 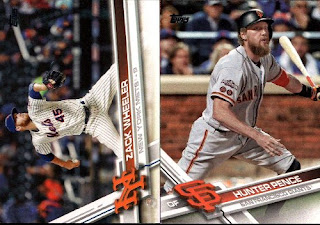 Zack Wheeler and Hunter Pence again. I didn't intentionally scan these two cards together. Pence wasn't needed before, and isn't needed here, either. But Wheeler was named to the second All-MLB Team in 2021, so I need this card for that award. 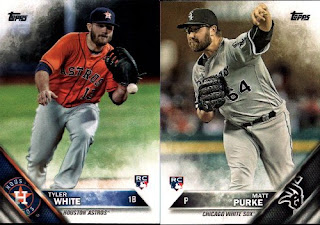 I love seeing those RC logos. Why? Because it means I am more likely to need that card. I didn't need the Tyler White, but I do need the Purke. 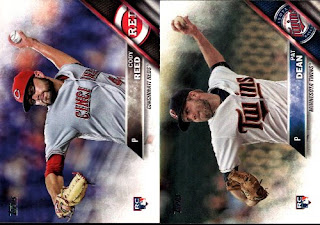 I forgot to rotate this scan. Oops! Here are two pitchers, from the same set, both on horizontal cards in the same basic pose. Both with two first names. Remember Reid Ryan? The spelling is different, but let's not be picky.  I don't need Pat Dean, but Cody Reed is a keeper. 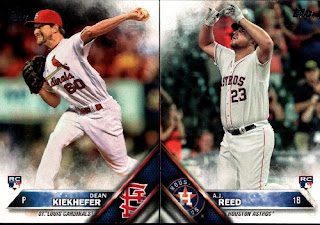 Another Reed! And another Dean! This time, Dean is the actual first name. I didn't scan these two together on purpose. I need both of these cards for the Archives, though. 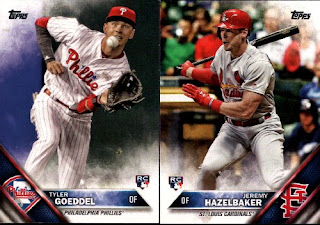 Goeddel's photo is great. I just wish he wasn't playing in the middle of a fog bank. That card is off to the Archives. Hazelbaker, also playing in the fog (as all players in this set seem to be), isn't needed. Almost done.., 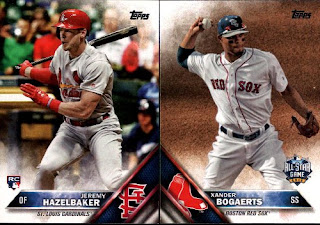 You're not seeing double. You're seeing doubles. This is the first (and hopefully only) case of getting a duplicate in the same pack, especially when I don't need either copy of the card. I do need the Bogaerts card because he won a Silver Slugger award last year. 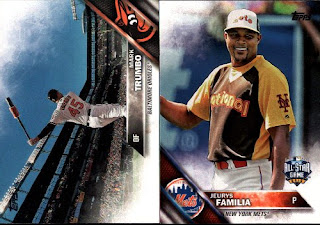 As much as I like the Trumbo card, it feels almost cliche at this point. It is a great shot of the stadium, though I would think looking out down the right field line might be more iconic. I don't need either of these cards, but I'm going to hold on to Trumbo anyway to see if I can find it a home. 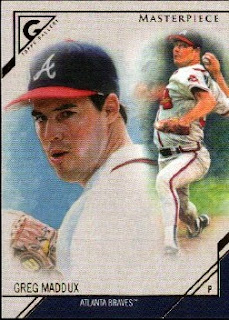 Finally, the best card of this pack, a Greg Maddux insert from Topps Gallery. Unfortunately, I don't need it. But it could end up in my Maddux player collection at some point. For now, it's off to the extras bin.

And that brings us to the end of the pack. Three of the cards are heading to my awards collections, and a very respectable 15 go to the archives, meaning this pack gave me 18 cards I needed. Plus that Trumbo. A good evening of card filing!