I should have saved this entire post series for Christmas. While I know there are no pay-off-my-mortgage types of cards here, it definitely would have been a fun 12 Packs of Christmas series. Since this is the fifth pack, should I expect five golden rings? I'm sure at least five of the players in this stack of 33 cards have at least one World Series ring. I ain't doin' no research to find out, but you're welcome to figure it out if you wish.

This is the first post in this series I'm writing at least a day ahead of time, so I can't tell you how my day went. But my plans included going to McDonald's for lunch. Thanks to bad weather, the pandemic, and I believe some labor issues, fried potatoes have been in short supply here. For more than a month, only small-size French fries have been available at McDonald's, even for the value meals (or sets, as they call them). Japan has potatoes; Hokkaido is known for its spuds. But McDonald's uses Idaho potatoes here, so they've been stuck without starches to peel. Other restaurants have had no such problems, because they use local taters, and some restaurants have even offered double-size fries for the price of regular fries.

Well, all that ended on Monday, as McDonald's has said they've fixed their supply chain issues. So I'm planning to get my favorite meal - a double cheeseburger set with fries and a Coke. It's the small things in life I look forward to, huh? (Edit before the post goes live - got my meal and a spicy chicken sandwich, too. Those things have a really good spicy sauce. The fries were delicious and fresh from the fryer! It was definitely worth the short walk.) 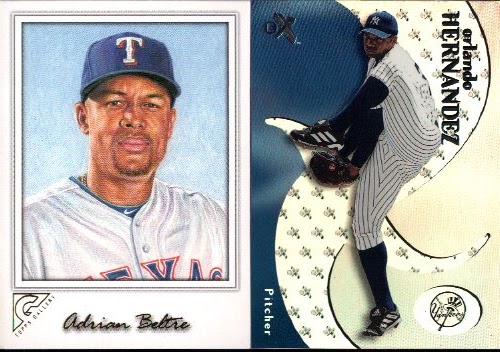 Adrian Beltre was so much fun to watch on the field. As for the EX card, I have mixed feelings. They definitely are interesting - one year, the card image was die cut and put on top of a clear plastic card, which made it difficult to sort, but they looked great. In this 2000 card, the same premise is there, but the card doesn't have the die-cut top layer and the plastic is opaque. The blue background looks almost holographic. The back has the same photo of Hernandez, but using a reverse negative, which is a neat touch. I don't need the Beltre, but I might hold on to the Hernandez just as a reminder about the set, until I can check out some other card backs to see what the reverse negative images look like. 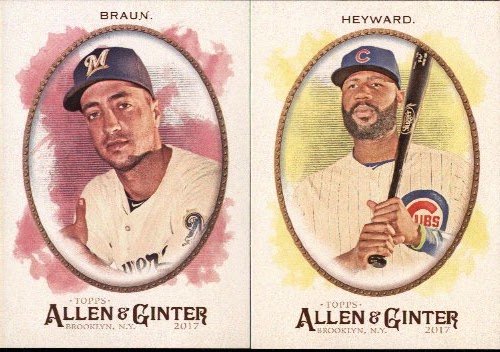 Ryan Braun may end up with an asterisk next to his name, but he is one of the best Brewers players of all time. Jason Heyward was supposed to be a superstar with Atlanta, and is pretty good with a glove, but his .259 career batting average says otherwise. I don't need either of these cards. 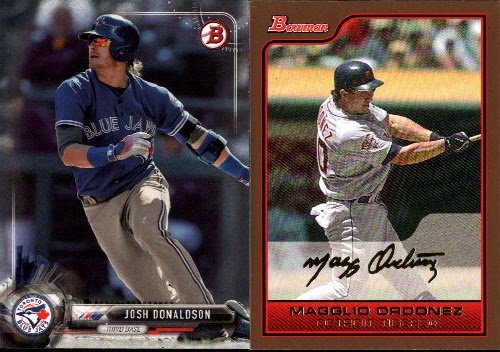 Not much to say about Bowman. The Ordonez is gold, but I don't need these cards either. 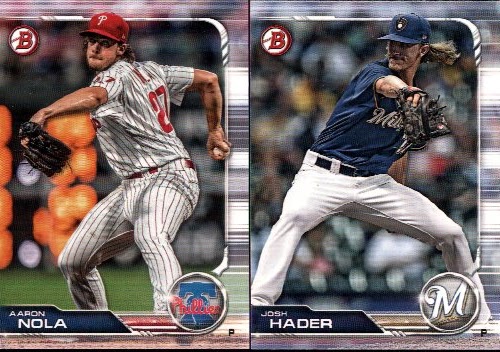 Again, not much to say. Josh Hader got a couple awards and participated in a no-hitter in 2021; his card is headed to my no-hit collection - the first card in this pack that I need. 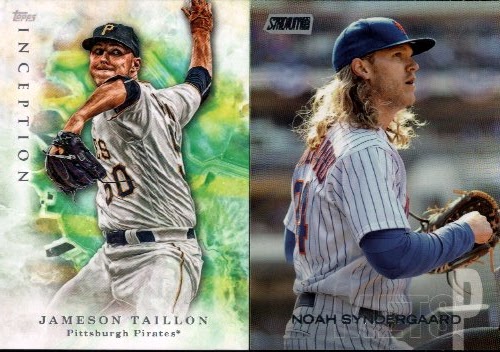 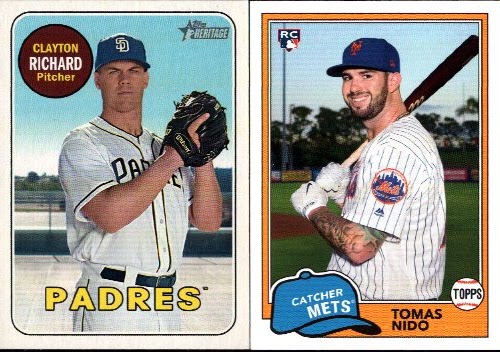 I get that, with Heritage at least, Topps is trying to replicate the original set as much as possible - poses, variations, etc. But I wish Archives would use interesting action photography instead of leftover photos from the Heritage shoots. I need the Nido, at least. 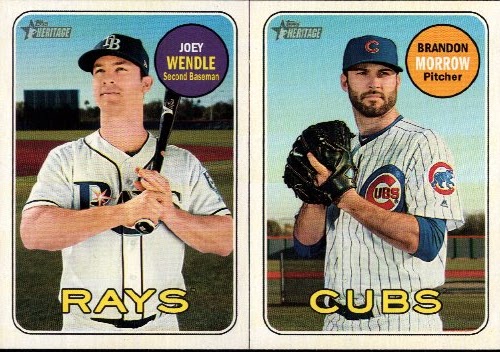 Wouldn't it be cool to spot some giant gas guzzling 1970s Oldsmobile or Chevy parked behind some of the players in Heritage's cards? These cards are discards. 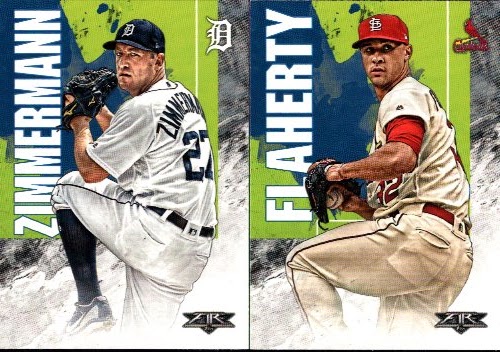 Ah! My cards are on Fire! I don't need the Zimmerman. Did you know there was a second Jordan Zimmerman to play in the MLB, only in 1999? I do need this Jack Flaherty card, though. 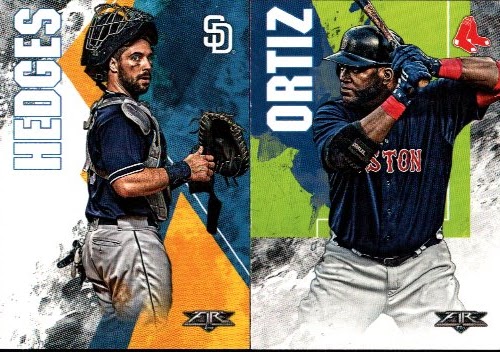 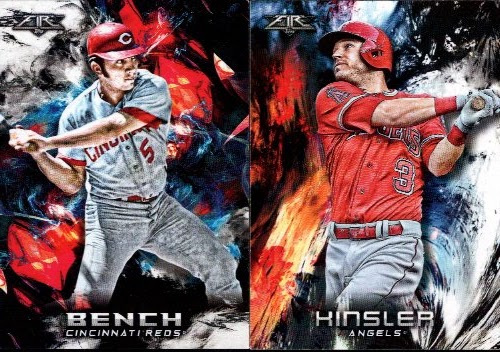 Speaking of Hall of Fame, hello Johnny Bench. I don't need either of these cards. 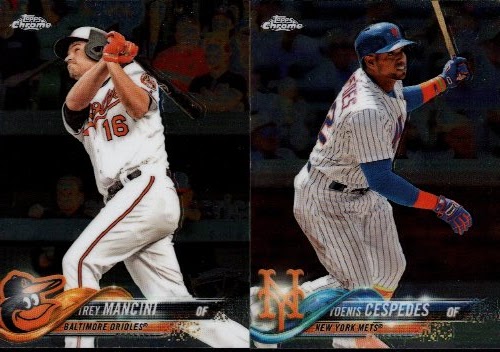 Each pack in this lot has been a great mix of different sets, but there is a lot of overlap between packs. There are 2018 Topps Chrome cards in basically every pack, and they have yet to entertain me as a set. But Trey Mancini won the Comeback Player of the Year award, so he's a keeper. Yoenis Cespedes did not win any awards this year, so he goes in the discard pile. 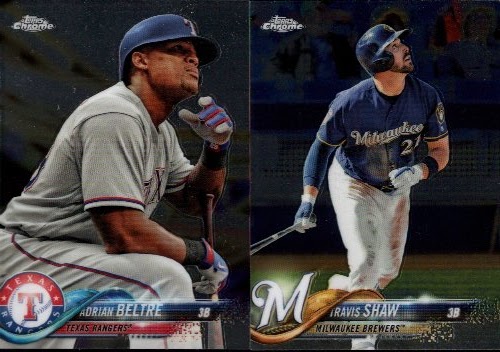 A very studious Adrian Beltre card, but not something I need. I do collect Beltre, and I think I'll keep this card for his little collection. Travis Shaw is a definite keeper for my archives collection. 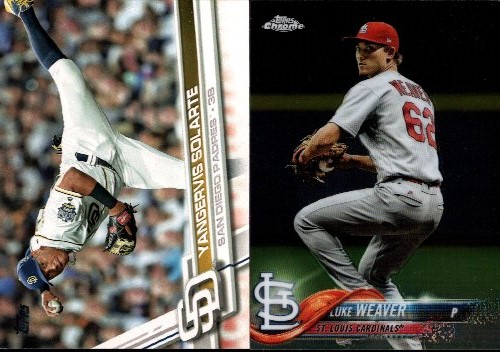 Well, I don't need either of these guys. Moving on. 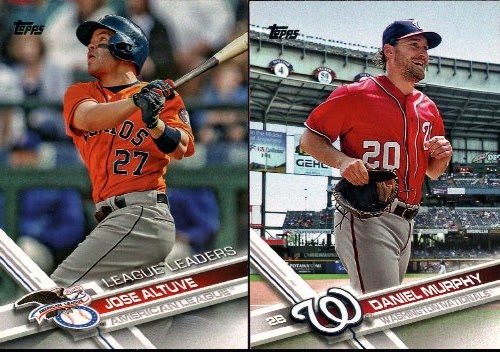 I don't need these cards, either. I like the background on the Murphy card. This type of shot isn't too original, but there's a great view of some of the retired numbers in Milwaukee. For now, Murphy survives. For now. Another Taillon card. You'd think he was a superstar. I don't need either of these cards. 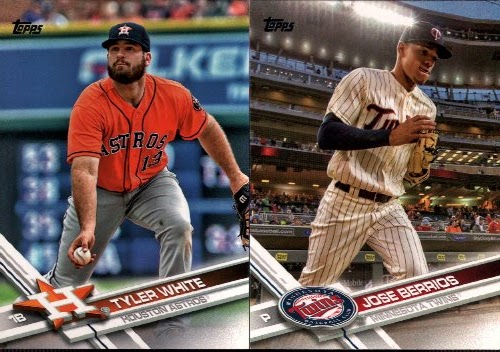 I don't need these cards, either. Berrios is another running-with-the-stadium-behind-him shot. This one is at his home stadium, but there are no distinguishing characteristics of the stadium in this photo, making it much less appealing than the Murphy above. 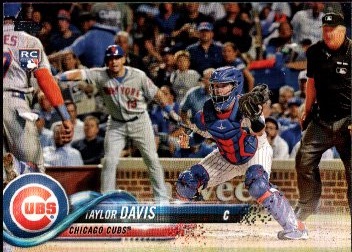 But there's one more good photo. Taylor Davis's card features a play at the plate against the Mets. Did you know that Taylor Davis batted .400 in 2021? Yep, he went 2 for 5 with the Pirates last year. As for the photo on the card, it comes from the September 14, 2017 game against the Mets. Jose Reyes is attempting to score in the top of the second inning from first on a double by Brandon Nimmo, but the throw beats Reyes by several steps. The ball, however, bounces off of Davis's glove and Reyes scores. The Mets would score six runs total in this game, but still lost to the Cubs, who plated 14.  I need this card for the archives, and it's a pretty good keeper.

Well, this particular pack didn't do so well for me. I had two cards for the awards and only four for the archives. I put aside four more that could be useful in the future, but in the end, only six of the cards here were needed.

Oh well. I'm off to bed to dream of French fries. Until next time...