Do you get the reference in the title?

Let's get into the ninth pack of random cards, shall we? 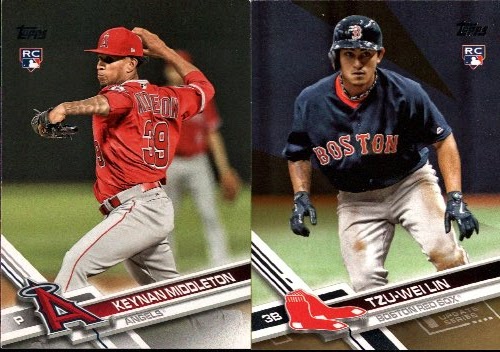 We'll start with some more of the most unappealing flagship Topps cards in the past decade. Luckily, I need both of these rookies. And yes, the Lin card is a gold parallel. 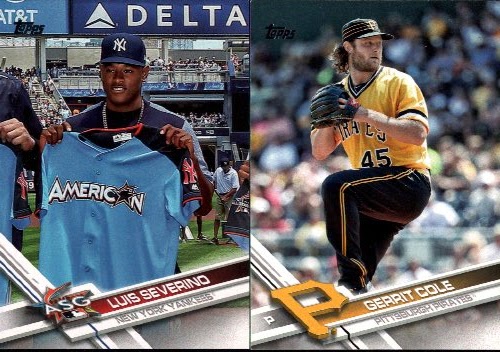 Luis Severino is back again. I like the photo because it isn't too common of an image. If I saw a bunch of folks holding up jerseys I would think much differently. Gerrit Cole was an All-MLB member last year, so his card is a keeper. But Luis is off to the discard pile. 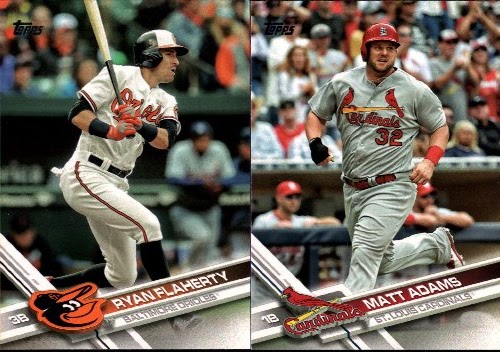 Ryan Flaherty is another card I need, which is fine with me! Matt Adams will be hitting the road, though. And we're done with 2017 Topps in this pack, thankfully! 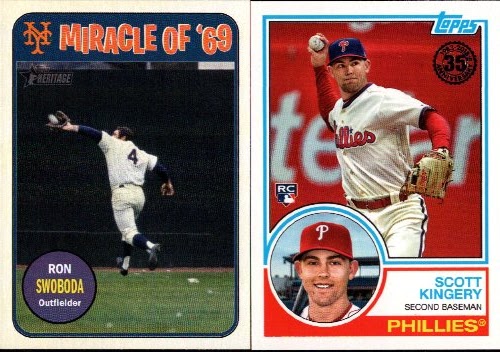 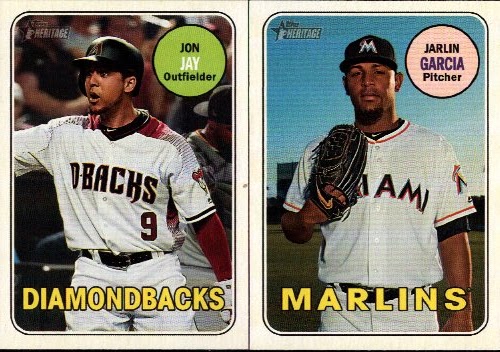 I appreciate Heritage, but I don't necessarily like it. There are some good insert sets, but overall it's just not my cup of tea. That doesn't mean I won't have the cards in my collection! Both Jay and Garcia are needed, and I'll gladly add them to the keepers pile. 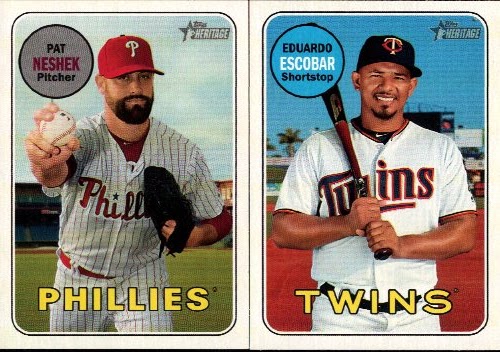 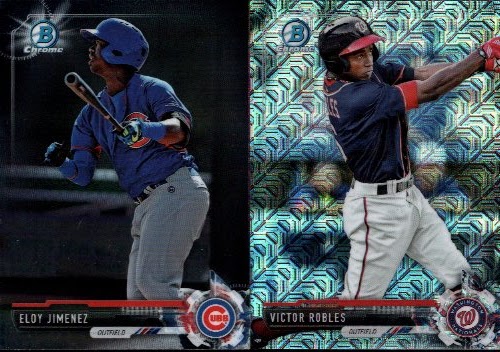 Eloy Jimenez, on the left, is a pre-rookie card, but I don't need it. Robles is also a pre-rookie; it is one of those mega box parallels with the tire track pattern. I need Victor Robles, though! 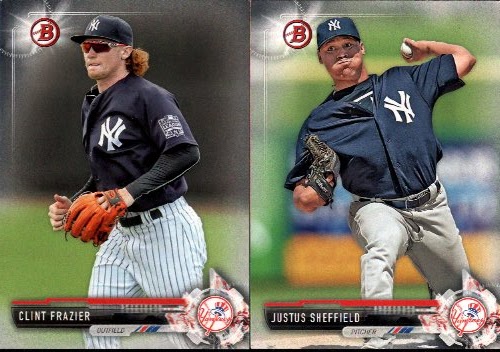 Prospect cards from Bowman are hit-or-miss, since several of the players don't make it to the show. Both of these guys hit the big time, though I already have a Frazier card. That means Justus Sheffield is a keeper! 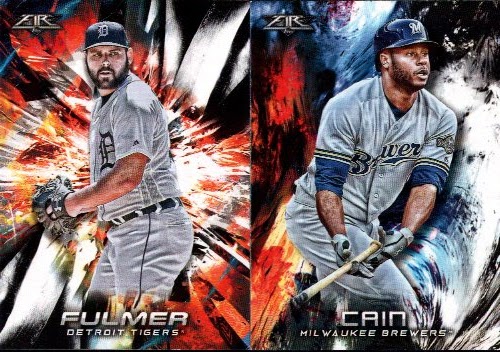 I'm not a big fan of cards where the player's first name isn't on the front of the card. It's plainly stated on the back, but there are players who share the same family name. Michael Fulmer is needed, but Lorenzo Cain is not. At least for McGwire, his full name is on the card, even if he is a green ghost. Danny Mendick's first name is missing on his card, but at least he is basically the right color, even if the photo is hyper-HDR filtered. I do need Mendick, though! McGwire isn't needed, but I'll put him in the keep-for-now pile, just in case he fits in somewhere later. 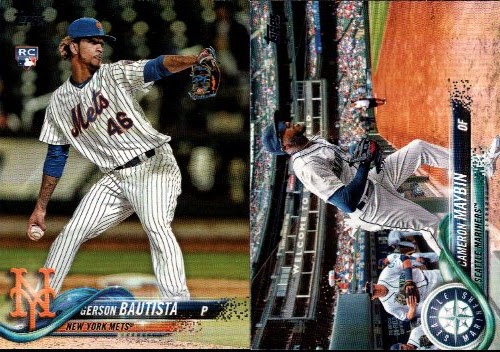 2017 Topps flagship's design was ugly. I mainly hated the type - the font, the italics, but I also didn't like the dullness of the invasive cross found at the bottom. 2018, on the other hand, has a more 3D style of design, and it doesn't cover the bottom edge, giving the card a better full bleed aesthetic. Gerson Bautista is an RC, and I need his card for my collection! Cameron Maybin's photo is nice, even if it is yet another running-from-the-dugout shot. This card gives a good view of the stadium press box, so it was a good execution of the concept. Unfortunately I don't need it. I'll stick it in the keep-for-now pile, though. I might find a home for it somewhere. 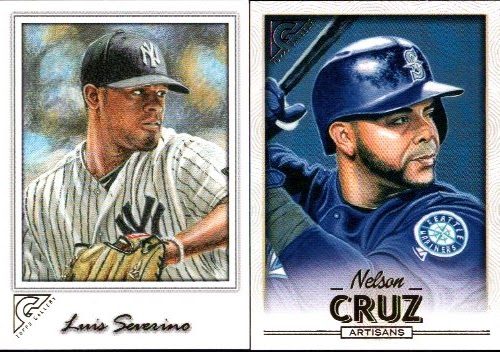 Speaking of cards I don't need, here's yet another Luis Severino card. Why is he in so many sets? Nelson Cruz is an insert card, and the artwork is really sharp. I need this card, too, because Cruz received the Roberto Clemente award last year. 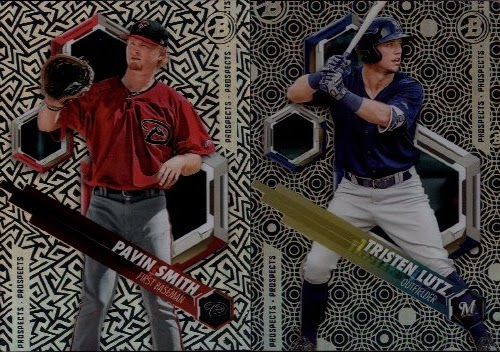 These two Bowman High Tek cards are pretty cool. Pavin Smith had his debut last year, but Tristen Lutz has not made it to the Marlins roster. I don't need either of these cards, though. 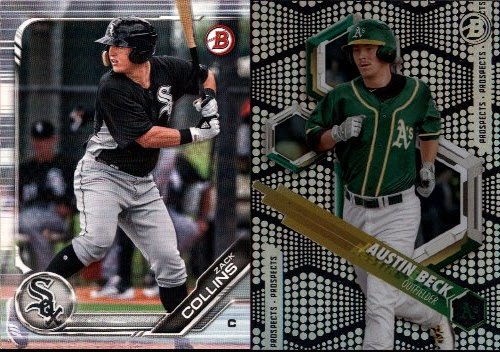 Zack Collins made it to the majors, and I need his card, but Austin Beck has not, so I don't. Who knows, maybe Beck and Lutz will have their debut this year? If there's a season? 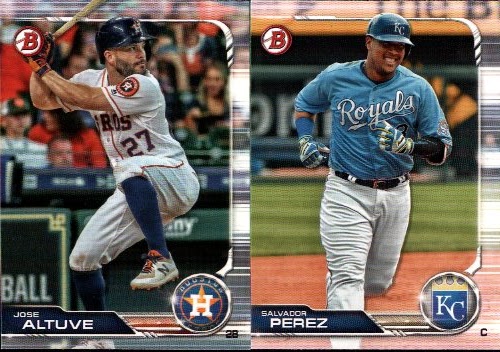 Jose Altuve is one of my favorite players, but that means that I already have this card! Salvador Perez has been around for quite a while, but this is the first loose card I've gotten of his, so he is a keeper! 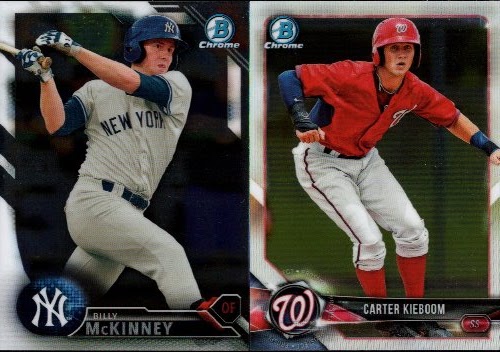 Billy McKinney and Carter Kieboom have both had their cups of coffee, but I already have cards for them. So unless they start winning awards, I won't need these two cards anytime soon. 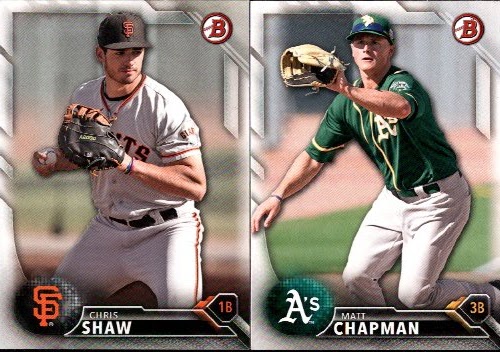 Two more Bowmans. And I need both of these! Chris Shaw heads to the archives, and Matt Chapman to the awards for his Gold Glove last year. 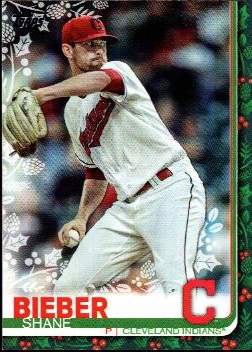 Insert Justin Bieber joke here. I don't need this card. That is all. 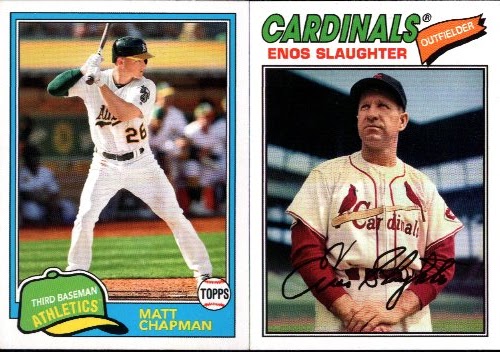 I needed a Matt Chapman card, and that Bowman card came first. But I like this Archives card more than Bowman, so I'll replace the Bowman with this. I don't need the Enos Slaughter card, but I've been saving the retired stars for possible use later this year. So this goes to that stack. And we finish on a high note!

I'm keeping 16 cards for the archives, three for my awards collection, and three are temporary holds. Nineteen or more cards from this one pack! Even if those three maybes end up in the no pile, I'll still come out with more than half of the cards being added to my collection. And this pack was much more interesting than the past few ones - more variety in the cards and more interesting card sets.