Seven Bucks Goes a Long Way for the Sixth Time

With twelve "packs" of 35-or-so cards each, I ended up spending about fifty cents per pack, or just over a penny a card. Not every card is a winner, as we saw yesterday. I'm assuming you have been reading, or at least skimming, every post. Or perhaps not. Well, go have a look, then. Just look at this month's posts for the other five packs I've posted so far. I'll wait.
So, here is the sixth pack of cards. 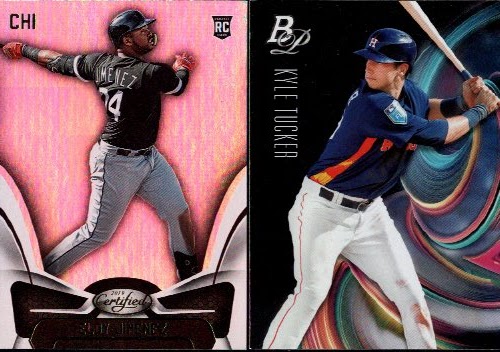 Eloy Jimenez"s Certified card comes from Panini Chronicles, a release I really enjoy from Panini, thanks to all the variety. I don't actually need this card, but it's nice to have anyway. Kyle Tucker's Bowman Platinum is needed though. Did you know that he was on the 2021 All MLB Second Team? (Is that how you say that?) I guess that makes him second-best at his position last year. 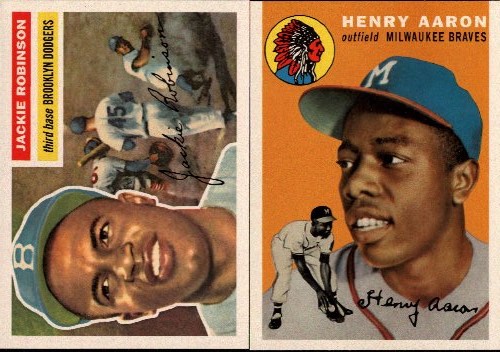 These two are from 2017 Topps and are promos for the Rediscover Topps buyback program. And flagship Topps. And Topps Bunt. And Topps Now. I don't need any Jackie or Hank cards these days, and these two particular cards aren't really valuable. But I doubt I'll ever own the actual cards these are reprints of, and I'm sure I can use them somewhere in the future. They'll go into the keep-for-now stack. 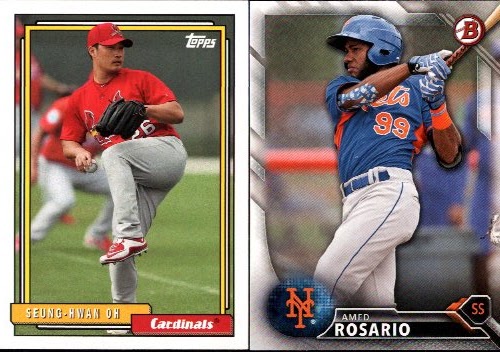 I wish Topps would put a little Topps Archives logo on the front of these cards. Just tiny "archives" print as part of the topps logo in the corner, there. At least the copyright line for Oh's card mentions Topps Archives. I need the Oh card, anyway. I don't need Rosario. 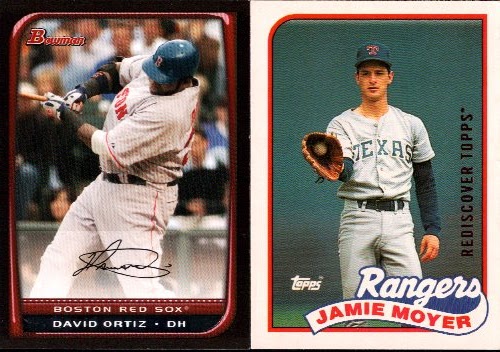 I already put aside the much more vibrant Topps Fire card I got of Ortiz, so this Bowman blahness will be added to the reject pile. Jamie Moyer is one of those Rediscover Topps buyback cards, as you can tell from the stamp along the side. By the time this card was printed, Jamie Moyer was already playing his sixth professional season. He wouldn't retire until the year 2042, as an 80 year old. I don't need Moyer either, but I might put together a small collection to commemorate his longevity, so this will go into the keep-for-now pile. 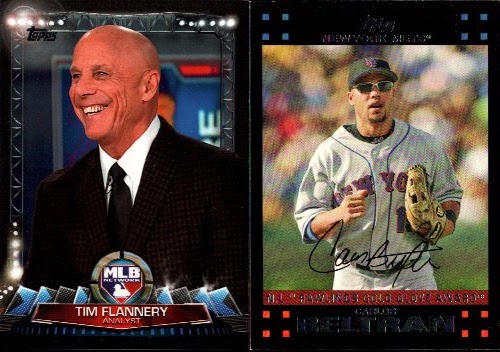 When I Googled Tim Flannery's name, I didn't get the baseball player. Instead, the top search results are all for an Australian scientist. I need Flannery's card, despite him being identified as an analyst here. As for Beltran, I've ended up with so many of his cards over the years that I am nearly sick of him. Sorry, Carlos. 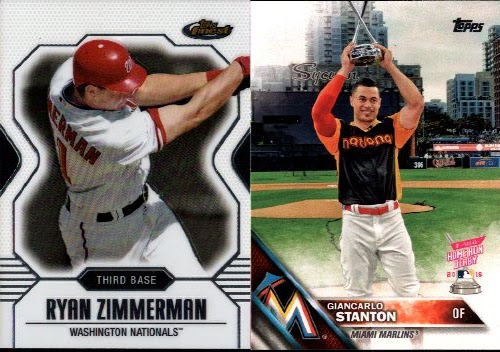 2007 Finest was probably one of the best set designs for colored refractors. Lots of white to be colorized. Sadly, neither of these cards will stay in my collection. 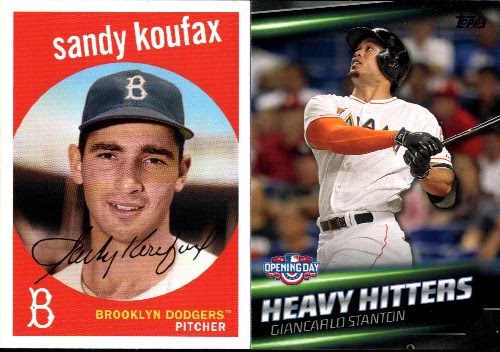 This Sandy Koufax comes from Archives. The Giancarlo Stanton card is an insert from Opening Day. While the Opening Day logo on the front says 2016, the card has a 2015 copyright. I don't recall Opening Day coming out in December. Baseballcardpedia says it came out in March. Why the early copyright date? I don't need either card, but I'll keep Koufax just in case. 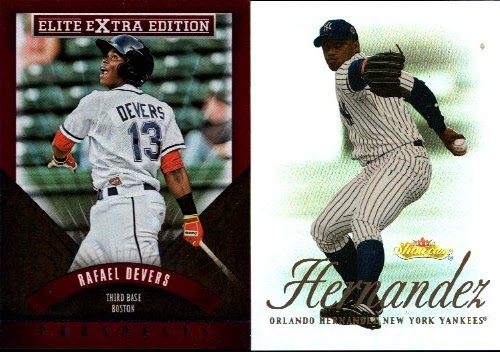 Rafael Devers is in the "Prospects" subset of 2015 Elite Extra Edition. Orlando Hernandez is from 2000 Fleer Showcase. Both cards are foil cards, but Hernandez really scans brightly. I don't need the glowy Hernandez, but Devers is a keeper for being on that All-MLB team with Tucker. 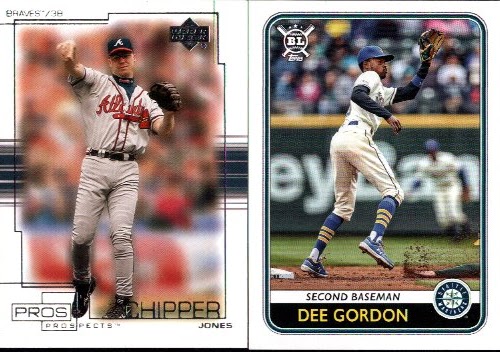 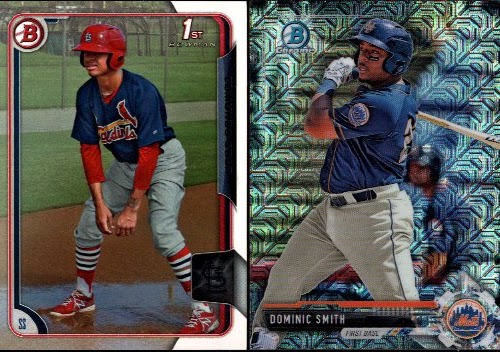 A couple recent Bowman cards for you. Edmundo Sosa, on the left, looks like a little leaguer here. If this picture was taken in 2014 (it's a 2015 card), he would have been 18 at the time. Sosa made his debut in 2018, and I need his card. Dominic Smith hit the majors in 2017, and this is a lovely pre-rookie mega box parallel from early 2017 Bowman Chrome, which I need for my type collection! 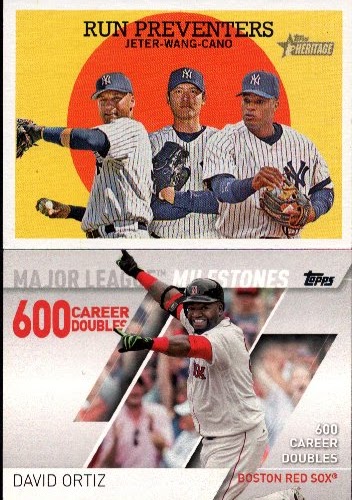 This vertical stack of horizontal cards feature at least two great players. Combo cards don't have much of a place in my collection, though, and I still have plenty of David Ortiz cards. 600 doubles is a lot. 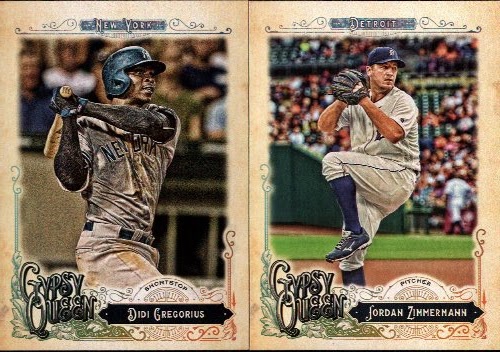 Gregorius didn't have such a good year last year. Neither did Zimmermann. It appears that Zimmermann has hung up his cleats for good. I need the Didi but not the Jordan. 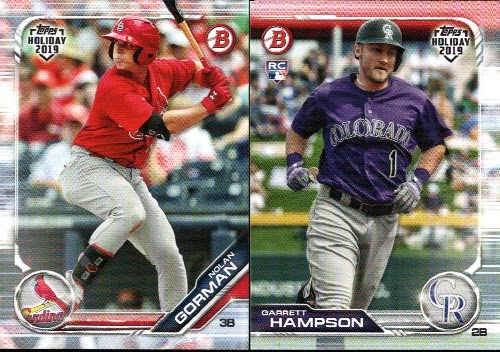 Why are the designs different on these two 2019 Bowman Topps Holiday cards? The numbering on the back is identical (TH-XX). The only thing I can figure is that Hampson is a major leaguer while Gorman isn't. I need Hampson, but not Gorman, at least until he makes his MLB debut. 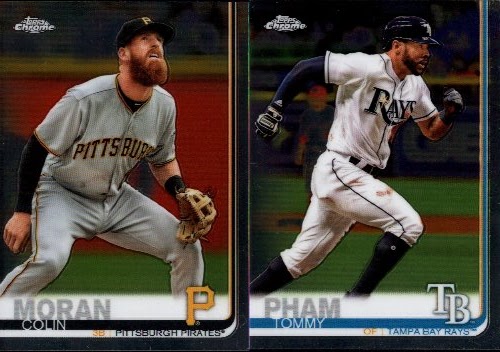 Colin Moran is a needed card, but we've seen Tommy Pham before, and he isn't needed. 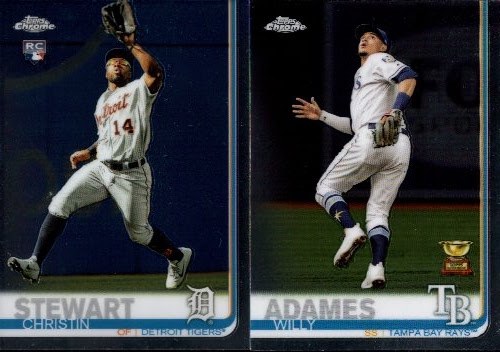 Both Christin Stewart and Willy Adames made their debut in 2018, but Adames got his RC logo in 2018, and Stewart didn't. But, thankfully, both of these cards have a home in my collection. 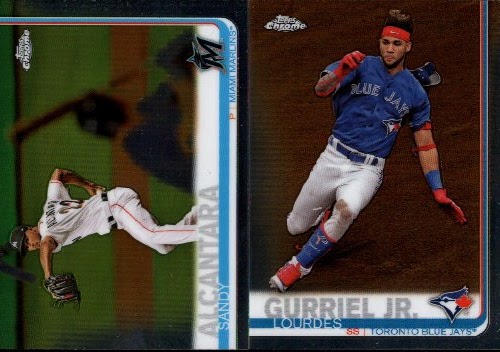 Two more Chrome cards. Gurriel Jr. was another 2018 rookie, and I need his card. Alcantara wasn't, and on an unrelated note, I don't need his card. 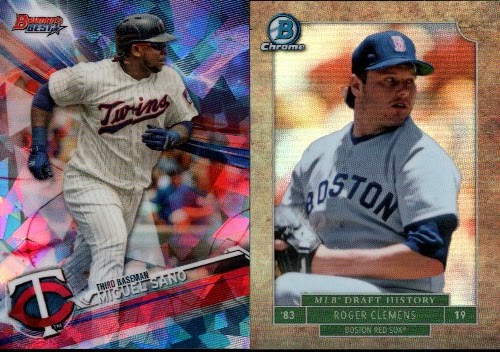 Which brings us to the final two cards. Miguel Sano's Bowman's Best card is a refractor, but I don't need it for the type collection. The Roger Clemens insert from 2016 Bowman Draft is another card I already have represented in the type collection. Two decent cards here, but neither needed. So we end on a sad note this time.
Overall, I needed 11 cards - nine for my archives and two for awards. I also put aside four more cards. Eighteen cards definitely have no place in my collection now, but even with just 11 cards, I feel like this was a worthwhile pack.
Until next time!
at 10:00 AM