Vintage Beauties: More than a Handful of Bromides

I continue my hunt for vintage. I love getting these old cards, regardless of condition! I pounced on cheap lots and oddball singles a few times last month, and these are just some of the spoils. 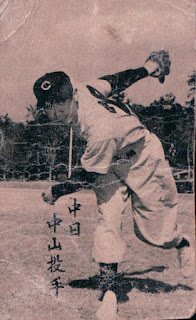 Toshitake Nakayama from the Dragons. I believe this is either from JBR 42 or JBR 17. JBR 42, 1956 Yamakatsu Tobacco Menko Sized, identifies Nakayama as being a left-hand pitcher at the end of his delivery. This set doesn't seem to have the "player" title after the name, as seen above (four characters in the left column instead of just two in the sample scan). JBR 17 is the 1957 Tobacco Menko Sized set, and recognizes two variations where the 8 in his jersey is partially obscured but his left hand is visible. There is no description of the writing on the front, but there may be only one column in the example scan. 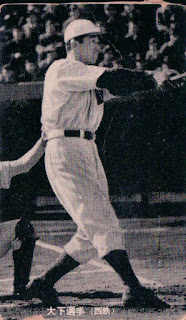 Hiroshi Oshita of the Lions. I can't figure this card out so it might be uncatalogued. It seems to match the description of his card in JBR 16, but the style isn't exactly right. 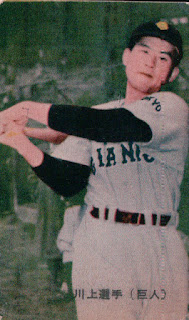 Giants player Tetsuharu Kawakami. Like the Oshita card, I can't identify this. That said, both of them seem to match the JCM 131 menko issues in terms of front design. They don't appear to be separated menko cards, though. It's possible this is JBR 18, but the text isn't quite right. 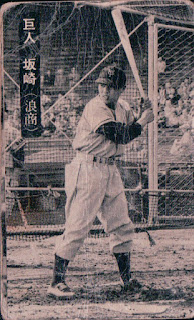 Another Giants. Again, a card that resembles a menko without the menko back: this looks like JCM 26. 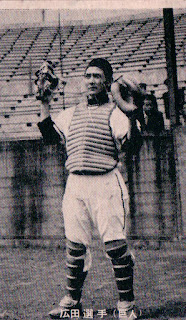 What happened to the borders on this card scan? Again, Giants. 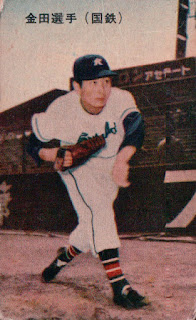 Hey, not a Giants! Instead, this is superstar Masaichi Kaneda. Don't know who he is? Check out his Wikipedia article for some details. Again, I believe this is a card from JBR 18. 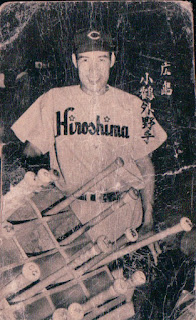 Hiroshima Carp non-batboy standing by the bat rack. Too bad there isn't more detail in the background. This should be Makoto Kozuru from the aforementioned JBR 17 set. 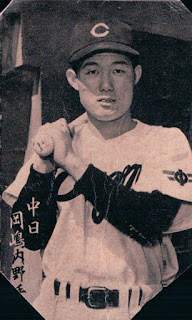 Okajima of the Dragons, also from JBR 17. The corners on this card have been clipped, not exactly evenly but it is unique. 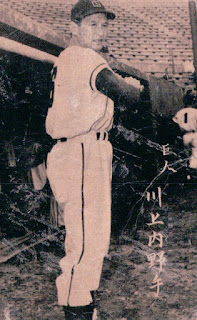 Another Kawakami card. And again, this matches JBR 17. 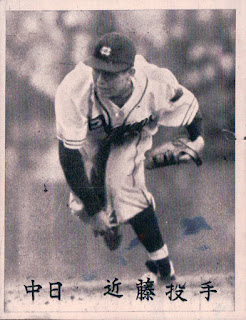 From the Dragons. I'm pretty sure this is Sadao Kondo from JBR 2a (1950 B&W Type II 3rd Prize Premiums). 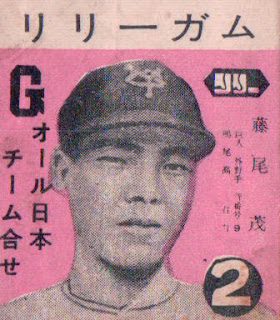 Here's another one of those tiny cards! This is from LiLi (ririi) Gum. It's small as it is, and that print next to the player's head on the right is miniscule. I have to wonder how they did it. 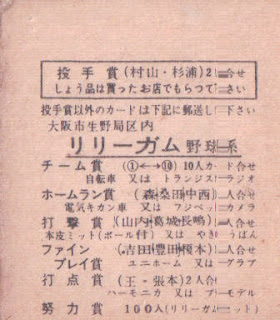 LiLi Gum's set came out around 1960. Each pack included one piece of gum. The front of my card depicts Shigeru Fujio of the Giants. Back text indicate that there were more cards than the 18 that were released.

And that's it for now! I find myself picking up more and more vintage cards - menko, bromides, and game cards - because they are so beautiful and identifying them is an adventure of its own!
at 7:00 AM