Do you feel lucky with this Calbee "Lucky Card"?

Since 1973, Calbee has included prize cards randomly inserted into its bags of Baseball Chips. Those prizes have varied over the years, but generally a card album has been at least one of the offerings. 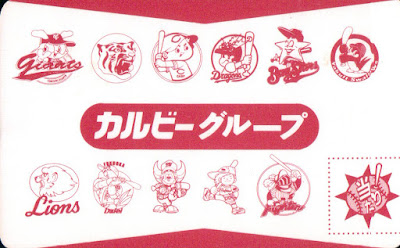 This card certainly stands out from the other cards in the set it came from - instead of a full-color, full-bleed photo, we get a monochrome-inked card with team logos. The center says Calbee Group in katakana, and on the bottom-right there's a baseball symbol that says "Atari" - winner.

Do you notice something, though? There are only 11 team logos. Let's see... Giants, Tigers, Carp, Dragons, BayStars, Swallows, Lions, Hawks, BlueWave, Buffaloes, Fighters... What's missing? The Marines! Nothing like skipping out on Lotte, your rival snack company.

Let's flip the card over. 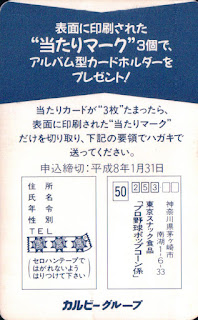 The back has details on redeeming the winning card. For this offer, you actually needed to collect three lucky marks from three lucky cards. The expiration is January 31st, Heisei-8. For those of you who don't know the Japanese calendar, that would be January 31, 1996. Do a little simple math, and this is a lucky card from the 1995 season.

I feel like I've shown this card (or one similar to it) before, but maybe it was a similar one - I tried searching for it in my previous posts but nothing came up. Oh well!
at 7:05 AM