For Japanese card collectors, Epoch has represented a true third-tier product. Where BBM has been issuing the most comprehensive collection of sets and the largest flagship set, and Calbee has been the longest-running issue and best-looking, Epoch has been just sitting off to the side, finding niches to fill. Several of their sets have been box issues focused on JBPA OB Club themes.

Those box sets have been decreasing, though - Epoch has issued a few super-premium boxes lately but they don't even come with full sets, looking more like a Topps Museum Collection or Panini Immaculate release. Last year, they issued what I believe is their first reasonably-priced pack-based baseball product: a set based around the JWBL (Japanese Women's Baseball League). That was a pretty simple issue - just base cards and autographs - but might have inspired Epoch to continue with some NPB issues.

By the way, I really hope Epoch makes the JWBL set an annual issue. I am 100% into that. 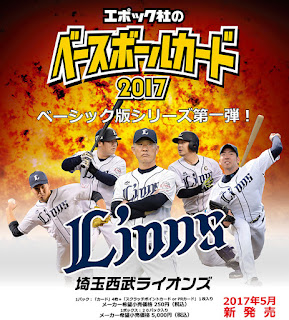 Anyway, the Lions team set is the first issue this year in this new format. It was released in late May. 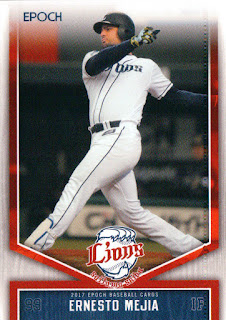 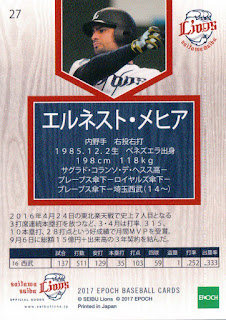 Similar to BBM team issues, the design is attractive but simple. Epoch used a bit more border space here than BBM's sets, with a home plate-shaped rectangle (huh?) for the photo and team logo; the bottom blue box has the Epoch name (despite the Epoch logo in the top corner) and player name along with the player's jersey number and position. Backs have basic biographical information (Mejia's mentions his US baseball experience. 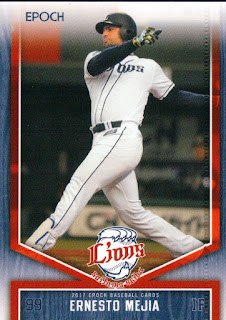 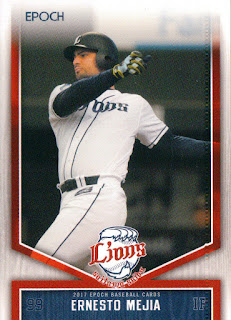 The 27-card base set comes in three variations. As you can see here, they are progressively tighter crops, which I guess is interesting at first. It's different from "look at different border colors!" or "we used different colors of foil!". 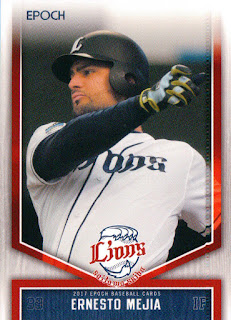 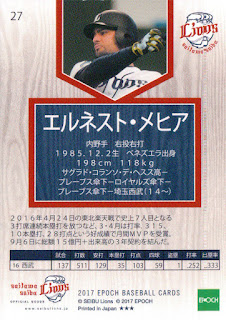 For those without the entire 102-card "base set" there is a notation on the back to help you figure out which version you have. If you check the original card back above, the "Printed in Japan" line has no stars. The card back here has three stars, indicating the third level of variation. 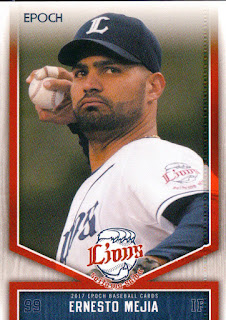 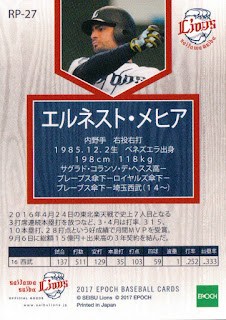 There is a 27-card parallel set, as well. Notice that the design and backs are identical to the regular cards, but all of the cards have photo variations on the front, which don't carry over to the back. And they carry RP- prefixes on their card numbers.

A series of insert and special cards can be found in the issue, partly involving a point system. The insert cards are called Holografica, and there are four types: Sluggers (9 cards), Hurlers (12 cards), Rookies (6 cards), and Combos (9 cards). I should mention that the Combos cards each have only one player but two photos.

Based on odds announced by Epoch for some other team sets this year, the Holografica appear two per box. However, I don't know of any announced odds for the Lions set.

There are nine autographed cards for eight different players. I believe that the autograph cards can only be obtained by collecting 100 points. I'm not sure how many points you'll get from one box; scratch cards have random amounts of points and I'm not sure exactly how many scratch cards come in a box. Each pack contains one scratch card or one "PR" card, which might just be a filler. I have yet to see any PR cards for sale from any sets in shops.