I don't think I have any particular way of introducing these cards as anything other than "A bunch of random stuff I haven't shown you yet, and the reasons why they are in my collection." Are you going to yawn?

I haven't seen many promos this year, but this Marines team set "Limited Edition" card was found at one of my local card shops. I believe there are Carp promos too.

Speaking of Hiroshima, I'm now one hologram away from a full set of 1993 BBM cards - for the Carp. The 1993 set is notable as it has the rookie cards of Ichiro and Hideki Matsui. Technically, the set is complete without the holograms, but I came across a large group of them at a good price and decided to go for the "master" set. But no, I won't get the other issues, like the All-Star and Japan Series sets. 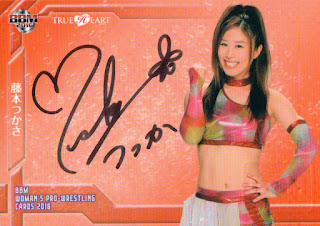 Tsukasa, another Japanese wrestler. Autograph: check! I'm down to six on the want list, if I do actually go after all of them.

The remainder of these cards serve as a "type collection update" for many of this year's parallels.

This 2017 Carp Fighting Spirit insert shows the lack of style in the #/100 parallel. I think it's the same as the regular cards, just with a serial number.

Exciting, huh? I am a bit surprised that I could get some of these insert parallels so quickly. A little bit of luck in the auctions, I guess!
at 7:00 AM