Working on US sets from Japan has its difficulties. Namely, I'm stuck using only eBay, COMC, and SportLots. And I guess the Beckett Marketplace. I can't browse card shops or attend shows. That said, with a few exceptions, I could finish off pretty much my entire want list - assuming cost wasn't a concern.

In Japan, though, modern cards can sometimes be difficult (I think some collectors hoard certain players) and vintage is a real pain.

I'm still a few cards short of my 1975 Calbee Giants Spring Training subset, for example. And I can't find that one BBM 1993 hologram. And there are two cards, which I believe are commons, that I still need for my 2001 BBM set. I'll have to check on that tonight when I get home.

I have made some progress on several sets, though, which you'll see here. 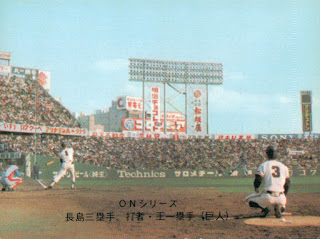 This card is from 1974 Calbee, the same series that has the 1975 Spring Training cards (Calbee was complicated back then, just check my archives for those posts). I saw this on Sean's blog and decided it had to be added to my collection! That's a beautiful shot - Shigeo Nagashima in the foreground watching Sadaharu Oh at the plate. A beautiful day for a day game, the stands are full. And you can see the stadium and its advertisements well, including a little bit of the neighborhood behind it. Topps: this is why you don't have to crop your card images so tight. The image itself has even more significance, but for that, see Sean's post.

One more card from that '75 Spring Training set came up in auction, so now I'm one more step closer to the full subset! 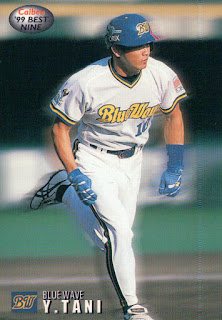 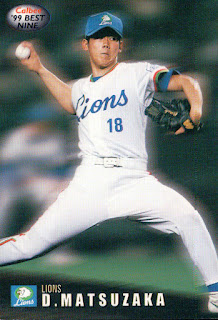 I'm collecting the 2000 Calbee set thanks to a generous gift from a student last year. It wasn't until a few months ago that I really started building it, but at this point I need the full Series 2 set and many of the "premium" inserts.

A couple years ago, I added the master Upper Deck lists to my want list. They released four sets (2000 Ovation and Victory, and 2001 Upper Deck and Victory). I'm down to just inserts, and these Home Run Explosion cards knock me down to just two for that insert set.

And these Rookie Roundups leave two more in that set. Both of these sets are from the 2001 Upper Deck issue.

I ended up with a bunch of singles from the 2000 Broccoli Lions set, which included a full base set and many of the inserts. So of course, I've got to finish that set off!

These are from the "Rare" insert set, and I'm down to two. I also need a bunch of the Dice-K insert cards. This should be a set I finish by the end of the year. 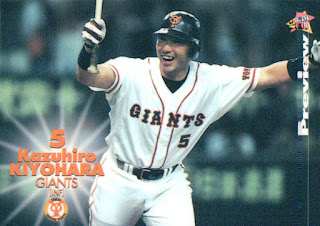 Speaking of finished, I also got a ton (seriously, a ton - like thousands) of 2000 BBM Preview singles. I was expecting cards from the regular set, not Preview - I guess I should have looked at the pictures a little more closely. Anyway, I was missing one card from the set, which I have now. Kiyohara isn't it; I accidentally wrote down the wrong card number. But I do have that mysterious final card and the Preview set is complete.

I found these 10 cards at a shop I frequently visit, but never thought to check for this set. I noticed the box of singles and cut my want list by half!

I still need many of the soccer players; soccer and baseball players in this set are the most valuable and most wanted in general because those two sports are also the most popular in Japan. 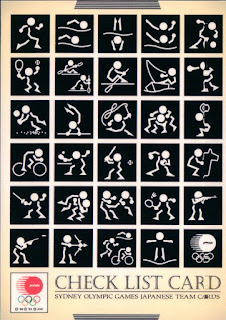 With the Olympics coming to Japan in 2020, I really hope BBM, Epoch, and/or other companies issue a set like this again. BBM issues a gymnastics set every year and has issued sets for other sports (badminton, curling), but a comprehensive set of the full Olympic team would be amazing! Even something similar to Topps' US Olympic set would be better than nothing.
at 7:00 AM