When you ask a non-baseball fan what their favorite team is, what answer will you get?

They are the Yankees of Japan. Those in the know hate them, while casual attendees and folks just looking for a good night out with their friends cheer for the Evil Empire. But they are Japan's team, and (thanks to lots of money) frequent playoff participants, so people like them. And when people like them, card companies make more sets and bigger sets and more complex sets. (See also: Yankees.)

This year's team set from BBM is not very different. It actually hit shelves in late May, but you know how lazy I am. 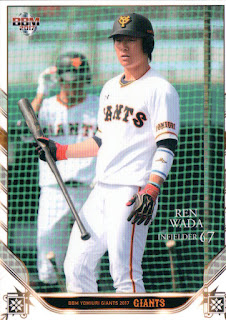 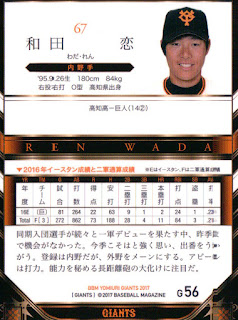 BBM did good with the base set, though, keeping it to just 81 cards. Gone seem to be the days of the 150-card team set, where every starter had at least three cards (regular, subset, and "Giants Pride"), plus many of the regulars getting at least two cards. The design is nice, with a good semi-transparent thing going on with the borders. By the way, my scanner went nuts on these borders so many of the scans look really wonky. My computer doesn't seem to have a problem with the word wonky. This is really an acceptable word? Anyway, the regular cards in the base set are the first 68 cards, plus one mascot/checklist card.

The first subset, of six cards, is Play for Giants. I guess it includes people who play for the Giants. Actually, the Japanese title for this set translates as "New Strengths" so it's a newcomers subset. 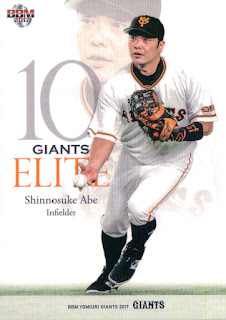 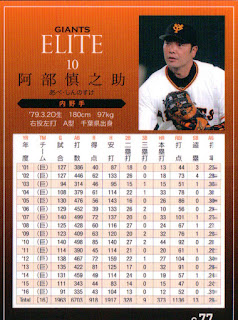 Giants Elite is a three-card subset of veterans. The backs include career stats so you can see just how long they've been playing. For a player about to reach 2000 hits and who will probably reach 400 home runs in 2018, Shinnosuke Abe is highly undervalued. He used to be the team's catcher, but as you can see he's now an "infielder". 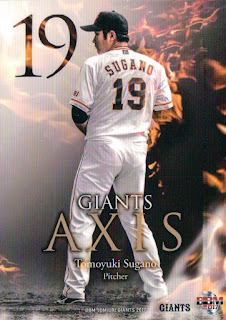 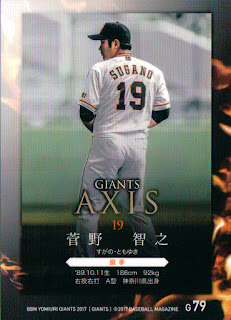 Giants Axis fills out the remaining three cards on the checklist, and features three young superstars. Or stars. Or just good players. Whatever you think they actually are.

As for parallels, I don't have any copies, but several of the cards in the regular part of the set have parallels which are serial numbered to 100 (gold signature), 50 (holo signature), and 25 (red signature). 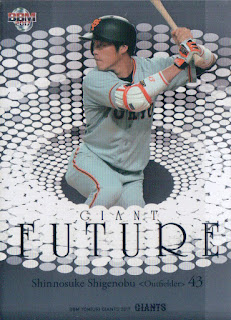 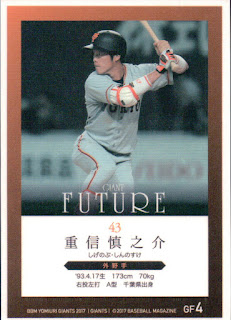 Giant Future is the small insert set, and it caps out at only four cards. As you can gather, it tries to highlight future stars of the team.

Giants Pride remains an insert set, though. There are 14 cards, making 18 insert cards total (how nice that it fits in a binder!). The checklist consists of the team's starting players.

Both Giant Future and Giants Pride have parallel versions with serial numbers - 100 (gold foil), 50 (holo foil), and 25 (some other form of holo foil).

Instead of autographs the Giants set contains foil autograph versions of the cross brand set, Cross Foil Signing. There are 18 cards in the set, and each is limited to just 15 copies.

An annual insert in the Giants team set is Super Metallic Giants. These cards are actual metal, and are obtained through exchange cards randomly inserted in packs. The nine cards seem to be serial-numbered to the player's jersey number, with a 1/1 black parallel as well.

While there are no actual autographs in this set, there are some memorabilia cards. The seven-card checklist is serial numbered from 10-100 copies depending on the card. Four subjects each have their own card (100 copies each), plus two dual-relic cards (20 copies each), and a final four-swatch card (10 copies).

The Giants set is always the most complicated release, probably because there are no autographs. I guess BBM needs to add some other stuff into the mix to keep collectors paying 8000 yen per 20-pack box. That's 6 cards per pack, so about 75 yen per card.
at 7:04 AM