You can't collect everything. It's impossible. With the existence of 1/1 cards, that should be pretty obvious, but even ignoring those parallels, there are about 45,000 different MLB sets out there. Add in around 7500 minor league team sets and over 10,000 Japanese sets. Oh, that's my type collection goal. Over 60,000 cards. I am approaching 20,000 cards, but the other 40k aren't going to be easy.

The same can be said for knowing all the sets. It's possible to be familiar with major releases, or be an expert on vintage gum cards, but stuff will always slip through the cracks. In Japan, a lack of documentation makes it even harder to know details about sets released even a few years ago. 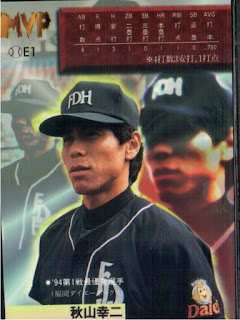 Sometimes the information is out there, but I've forgotten, misremembered, or misinterpreted it. And I'm not talking about translation and language barriers. The above card of Koji Akiyama is an insert card found in the 1995 BBM All-Stars set. I had it labeled as "All Stars Inserts" in my list, but I never properly attached it to the box set, instead believing it came from regular packs. Since I never came across one in the wild, I recently reviewed Engel's last guide containing modern cards, and realized that the inserts were, in fact, found in the box set. Knowing that, I could quickly hunt one down, and now I have a full 1995 All-Stars set to go with it! 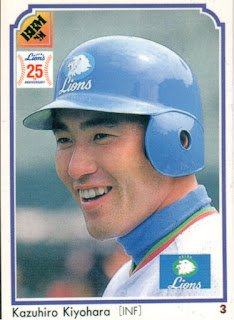 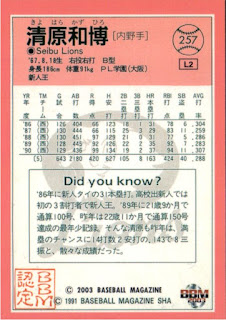 The Seibu Lions celebrated their 25th anniversary in 2003 (25 years of being the Seibu Lions, not the overall franchise anniversary). BBM reprinted cards from their 1991-2003 sets, adding a special logo on the front, and a second copyright line, second card number, and special stamp on the back.

There are actually two different sets of this type. The above card, with the number L2, comes from a 25-card "limited" set. A second series, with LP card number prefixes, uses the same design, but only has 10 cards, and seems to be less rare.

Both sets are mentioned on the backs of the promo cards below. These three cards reproduce the covers of past Weekly Baseball magazines, with the backs advertising a special event for the release of a "mook" for the Lions anniversary. The event took place at Seibu Dome and one Seibu department store location. With the purchase of the book, you could receive an LP promo set, and it appears that the 25-card set could also be purchased for an additional 1500 yen. The 25-card set was limited to 1000 copies; that's not a big number, but I'm surprised I haven't seen more of them around.

Here are the three promo cards, front and back: 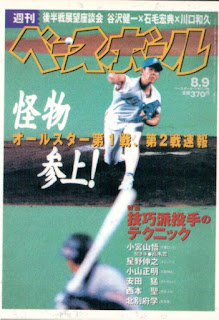 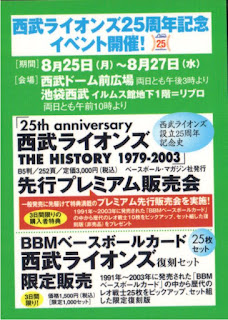 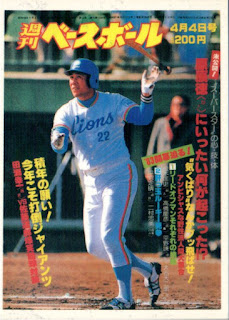 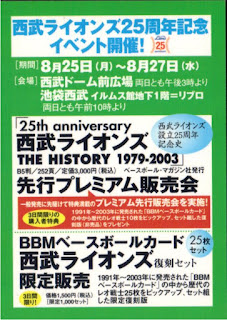 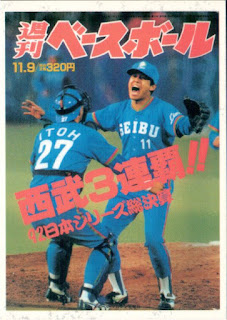 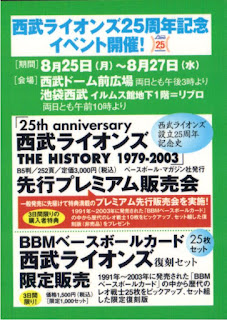 Finally, this card is a promo for the Chiba Lotte Marines issued in 2004. It's numbered MP9. 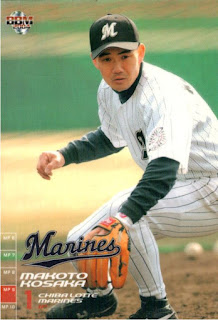 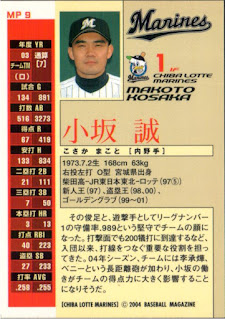 If you're interested in the details, check out NPB Card Guy's post about this set. Basically, it was sold with a particular snack at a small chain of convenience stores in a small part of Japan. Despite discovering this set in 2019, I didn't actually get my own card from the set until a couple weeks ago.

How many other uncatalogued cards and sets are floating around out there? I'm still learning, but I'll never know. Until next time...