The 1998 BayStars team was pretty good. I'm not going to get into the details, but the team won the Nippon Series for the first time since 1960 - that's 38 years. Their opponents, on the other hand, were the dynastic Seibu Lions. The dynasty was basically over by 1994, but they won the league championship in 1997 as well.

To commemorate the BayStars' success in 1998, BBM issued a limited box set. That set was so popular and sold out so fast that BBM created a second series. The two series are numbered sequentially; series one is #1-40 while series 2 is #41-80. There are some similarities in the sets: both start with a collection of single player cards (the same players in the same order), followed by a handful of subsets. You'll series one's subsets below; series two had six retired players and three congratulatory cards.

Series One is very difficult to find. I have never seen single cards in shops. I've found some singles from Series Two. Recently, I found a good deal on the first series set and snatched it up for my collections. Many of the cards are off to the type collection, while a couple others found homes in other collections. But before I split everything up, I scanned in the fronts to share here, so you can see a full set.

So, without further delay, here is Series One in card order. 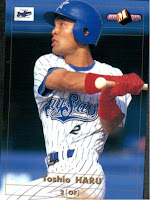 38-40
The final three cards use gold foil for the text at the bottom.
Gripes about this 23 year old set include a lack of highlights. We get three memorable game cards in a subset, but all three just show the team celebrating. It would have been better to see more season highlights and include photos of those actual highlights. The regular card photos all look like ones you'd find in any BBM set, either, so there aren't many good reasons to buy this set.
The best card in the set is obviously the one with the bullpen car. I'm not knocking the set, it's just rare to see a bullpen car on Japanese cardboard, and it seems to be an action photo as well!

Just so you can see both sides, here is Bobby Rose's regular card in the first series set.

Just FYI, I don't have a second series set and I'm not planning a post right now specifically featuring Part II. So here is Takashi Saitoh's card (#YB42), front and back. His first series card is #2 if you want to see the photo they used for the front. Judge for yourself.
Until next time...
at 9:00 AM