I'm really working hard to finish off several of the sets on my want lists. For US cards, those are basically baseball, but here in Japan, I've come across several non-sport and non-baseball sets that I've been working on tracking down.

This is no easy task. Finding major-issue singles, like from the 1995 and 1996 BBM sets, is hard enough. But looking for relatively obscure cards from random issues from the same period is even more difficult. 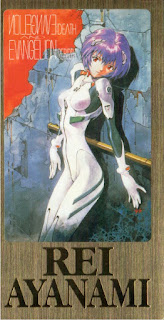 If you don't know what Evangelion is, you probably don't know modern Japanese culture. It's one of the most well-known anime of all time, and after an initial one-series run, has seen multiple movies released over the past 20 years or so. The latest one should be in Japanese theaters this year. When it was originally released, several different card sets, some with multiple series, were rushed out in varying formats. The Death/Rebirth Widevision series might have actually been printed by Topps' factories, though it doesn't carry any logos from them. For the longest time, I've been one card short of a full set, including the SPs. Finally, I made a bit of a revelation. There is a second Widevision set, and distinguishing the two can be a bit tough. But one of my identifiers turned out to be wrong, and after checking that Rei wasn't in the other Widevision set, I grabbed this card as fast I could. One card, one set crossed off the list. 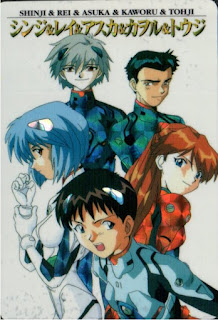 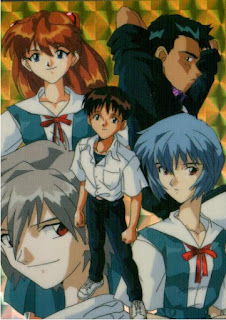 These two cards have holographic backgrounds. It's hard to tell on the white card, but it's there. Sega (yes, the game company) was involved in this issue; it might have been two series or just one, but either way it's a 108-card set. I thought I was missing only three cards: these two and one more higher-numbered card. But after getting these and checking my collection, it seems as though I might be missing four more instead of just one. I believe the three I'm missing are regular cards, and it's possible I have at least some of them in a box back at my apartment (yes, I'm still on the road).

At least one of these next two cards might look familiar to you. 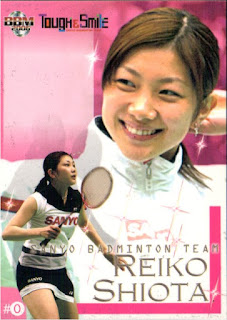 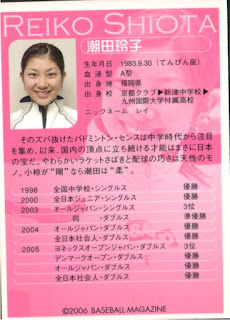 These two essentially unnumbered cards were included in a 2006 issue of SCM magazine, and were the last two I wanted for my collection. I picked this Reiko Shiota up earlier this year, but I now have  second copy, which came with this: 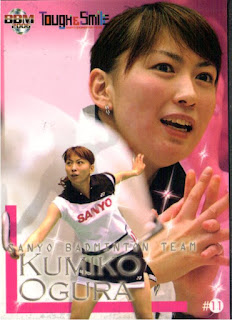 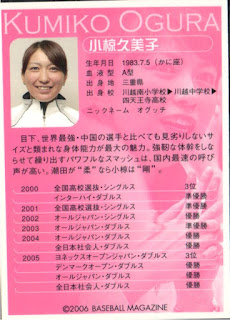 Kumiko Ogura makes my SCM collection complete. The Shiota card has a #0 on the front, while this has a #11, but I'm not so sure those are meant to be card numbers, as I had first guessed. Instead, I think they might be "jersey" numbers. Eitheer way, I'm happy this multi-year adventure has finally drawn to a close. 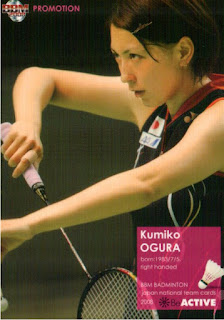 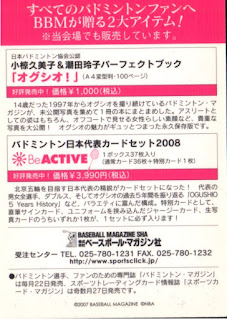 While searching for the Tough & Smile cards, I came across two promo cards from the Badminton box set "Be Active" issued in 2008. 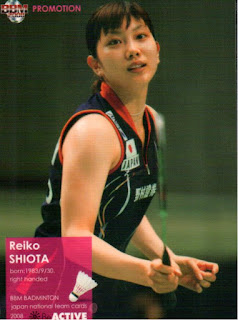 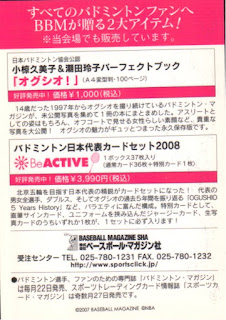 The cards have identical backs. There are two things advertised on each card: a photo book titled "Ogushio!" that was sold for 1000 yen, and the Be Active box set, sold for 3990 yen. I didn't know about the existence of these promos, but I figured they would be a nice accompaniment to the base Be Active set I already have.

While I wasn't able to finish all three sets, two are done, and the other may need more cards, but it needs easier-to-find cards. So, until next time....