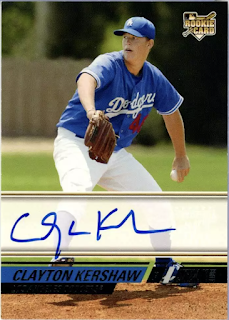 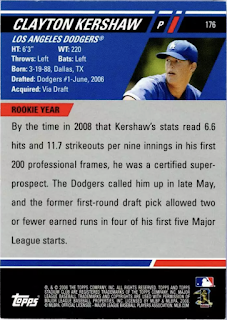 I present to you: Clayton Kershaw. This card is arguably the key card in the 2008 Stadium Club set. Max Scherzer is giving him a run for his money, though.

And it's mine, now. With that purchase, I now have a full set of 2008 Stadium Club! To be honest, my set is a bit of a Frankenset.

There are several parallels. For non-autographed cards, First Day Issue Hobby are numbered to 599 copies, while Retail versions aren't serial-numbered and found one per pack. There are also blue, gold, and platinum Photographer's Proof parallels for all cards #1-184, numbered to 99 or less.

Finding all of the variations and stars in regular base form was actually much more difficult than picking up parallels here and there. I especially relied heavily on retail First Day Issue cards for the /999 base cards and photo variations. There are even a couple Photographer's Proofs in there!

I'm definitely glad to knock this set off the list! I still need to finish a few Topps throwback sets. Perhaps those are my next focus. What set has been nearly impossible for you to finish?