I'd love to say something interesting but... here's a graph instead!

I have some great ideas for posts. Well, I think they're great. There are topics to address based on my "what I collect" post, plus cards and sets I want to share, and there's a ton of other thoughts popping in and out of my head about baseball. Today's focus is on the biggest part of my collection.

What I call my "Super" collection is an attempt to have one sample card from every baseball card set ever issued. Yes, this is impossible. Even with Bill Gates-level money, there are people who will never give up their one-of-a-kind cards, which are the only examples from any given set. Included in the full "Super" listing are sets like "2005 Topps Chrome Update Barry Bonds Home Run History Printing Plates Cyan." At least those have a few hundred examples. How many 1867 Troy Haymakers CdV's are running around out there? Total? So, yes, the set will never be finished. But I can try to get somewhere close. I know most of the 1 of 1s won't be obtainable, but several of the hard-to-get sets from recent years are simply parallels of easier-to-find base cards and inserts.

The listing is based on the Beckett set listings. I have added in cards that aren't listed (usually team issues from the past few years) and keep a separate list of cards that probably won't ever be listed. I keep a fairly simple-to-use but large coded excel workbook to keep track of inventory. And while it's not fully accurate with tracking what insert sets I collect, it does accurately track the "master" collection at the same time (which I'll look at in a future post). (I have separate workbooks for all the sets, team sets, and players I collect.)

As of the end of last year, there are 31799 card sets identified in the database. I have 5326 of those, 16.7% complete. Since 1898, there has been at least one card set issued every year. Some of those card sets aren't really cards - Beckett lists ticket stubs, programs, and even books in their card database. The only listing for 1900 is "1900-99 Non-Fiction Books" which is a partial list of baseball non-fiction books, obviously enough. There are three listings in 1903, two of which are programs and ticket stubs for 1903-1999 World Series games. There are additional listings for the Championship Series games, but none for the divisional playoffs, and I don't see a listing for any stubs or programs after 1999. 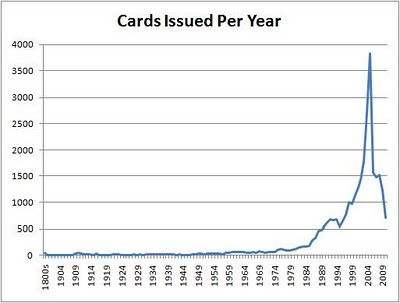 This graph is pretty self-explanatory. Despite the Topps strangehold, team issues and premiums kept a decent number of issues during the '60s and '70s. In fat, you can see an increase in 1975. A lot of the increase in sets from that year on can be attributed to SSPC and TCMA issues. And notice that it wasn't until 1985 that the real increase in sets began. More team sets were issued, and the major manufacturers began issuing even more smaller packaged sets such as the 1987 Fleer Exciting Stars set. Many additional sets in the 1980s and 1990s were minor league issues. Despite the creation of parallels and the 1990s insert craze, the number of issues showed only minor inflation (1991: 612, 1997: 769) until 1998, when the number of sets finally broke 1000. And you can see the overall exponential growth, and the major explosion from 1998 on. The peak was 2005, at a whopping 3837 sets. 2004 saw 2720, and those are the only two years that broke 2000.

Also of interest on the chart are the two major decreases. 1995 saw a decrease from 678 to 535. It appears the decrease was due to a drop in team issues. And the decrease since 2005 is obvious - the end of Fleer, the loss of the Donruss license, the restrictions on numbers of sets released, and then the loss of the Upper Deck license. 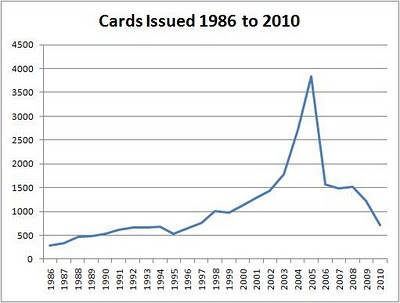 This chart just zooms in on the number sets since 1986. The 2010 number will increase a bit once some of the last sets of the year are added (Topps Update, Bowman Platinum, especially). 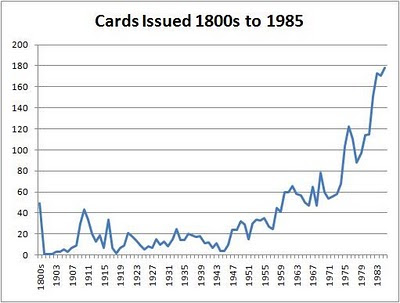 Now, the years before the big explosion are fairly interesting. You can see some interesting areas on the chart.  The initial high number is due to me not spreading out the years prior to 1900. Not many sets were issued during the 1900s, most of them postcards. The explosion in the years after is due to the tobacco card craze, and the drop came when the tobacco companies merged. For a couple decades most issues were candy inserts, until the 1940s and the war. After hovering around an average of 13 sets per year for the 1920s and 1930s, it dropped to a low of 4 per year (all team issues) for 1944 and 1945.

Now for the fun stuff. With all those cards, how well am I doing at completing this collection? Well, let's look: 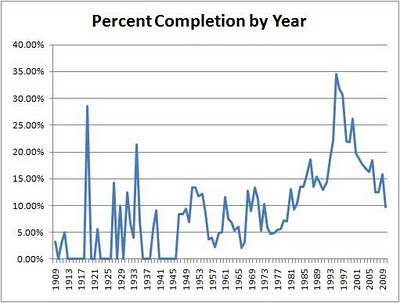 With so few issues before 1945, it's easy to try to advance those years. Of course, many of the cards issued during those years are either really expensive or difficult to find (usually both). Most of what I need are team issues from the past thirty years. If you'd like to talk about trades or anything, drop me a line. Keep in mind that my collection of cards that I have to trade is minimal right now (most of my cards are across the country) but we can talk business.

Any questions, comments, etc about this data? Let me know! I find this stuff interesting. I finally got in the writing mood tonight.
at 11:29 PM