The story of how Upper Deck came to be is actually quite interesting. I'm not going to rehash it here. But during the push to get a license, the company produced two promos: one of Wally Joyner, another of DeWayne Buice. They were selected because they were supposed to be part owners of the company (which they ended up not being permitted to do because of being active players at the time). The cards look similar to the 1989 issue with only a few differences. There were three versions of each promo produced. The most common "A" version has the hologram at the bottom. There are about 12,000 of each card. The "B" version, limited to 5000, had the hologram extending to the edge, while the 1000-card "C" version placed the hologram at the top. These are the "A" version, which I got in the mail today (not sure what the scanner was thinking cutting off the Buice border): 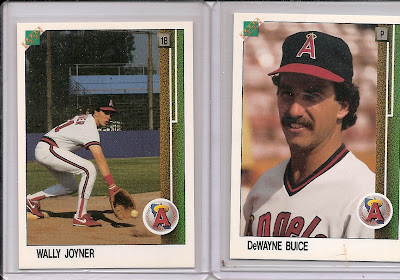 As I said, the cards look similar to the 1989 issue. These really were Upper Deck's first cards ever released. It seems that they are not of as good a quality as the 1989 issue finally was. The printing doesn't seem as crisp and sharp. But even then, comparing one of these to a regular issue of Topps, Donruss, Fleer, or Score, this card is far superior.

The story of how Upper Deck came to be over the first five years is quite interesting and if you haven't read it, the book Card Sharks is an excellent read. It discusses how the company came to be, how difficult it was to obtain licensing, and some of the highlights (and troubles) over their first half decade.

There's no denying Upper Deck changed the hobby. They brought a change from the "same old" cheap cardboard, easy photography, and simple, boring design. They are the ones who brought autographed and memorabilia cards to the market. And while some people like these and some don't, Upper Deck brought more and better offerings to us. There was an obvious cost to all this - the crash in 1998 from oversaturation, the insanity of jerseys, parallels, and autograph inserts that resulted in nearly 4000 different sets issued in 2005, the end of Fleer, Score, Donruss, and Playoff over the years, and the strange card situation we're in now.

It will be interesting to see where the hobby goes in the next several years. I might make some people mad by saying I would like to see Upper Deck be able to produce maybe five sets a year, with a tight leash on what they're allowed to do price-wise. (The same goes for Panini - even though I don't collect other sports I can see what they're doing.) Let them do their base set, a cheaper set (Collectors Choice/First Pitch), a retro, and a premium, and perhaps something else (super premium like Ultimate Collection, perhaps).

Now, I know some people have been angry with Upper Deck about things like redemptions, and I was quite upset with them about collation (and so I stopped buying boxes - let other people try to get the autos). But I hear so many complaints about Topps - redemptions, collation, quality, etc - so it's not just them.
at 12:37 AM