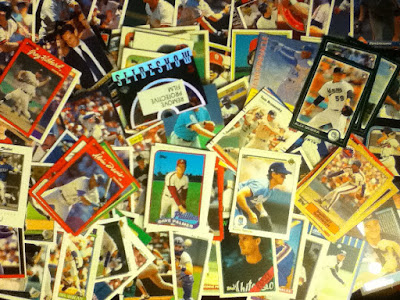 Welcome! This blog is an attempt to share my love of baseball cards. Simple, right? It's been done, right? Well, yeah, and a look at the list of blogs I follow will show you several others who feel the same way. So what do I hope to provide? Another insight, perhaps. I hope, over time, to give you an idea of what I collect and why, some of my favorite cards and sets, and takes on some collecting ideas. I'm quite eclectic, and my tastes and interests (even in cards) are broad. So, this blog won't have a direct focus, like bad cards, or night cards, etc. Just whatever comes to mind on cards. And this first post will be long.

So now, a bit of history on my card obsession. I started collecting in 1989, at the age of 11. Yes, I'm 32 now. It started with two things. The first was a Scholastic Book Club order of a starter collecting kit. I know I took those cards and rubber cemented them to poster boards by year or team or something. I remember them to this day, even though I don't think they really started my real interest in collecting cards. I was a collector before then, but I never had a focus. I guess I still don't (that's a topic for a future post, though). As a child, I would collect everything - Legos, Micro Machines, shells, rocks, books, Hot Wheels, etc. So it made a lot of sense that eventually I would become interested in baseball cards. I'm sure my mom thought it was some passing phase, but the kit was cheap, and I always bought a bunch of books, so there was probably some incentive offer that allowed me to get it for free or maybe get something else free. So I had my first baseball cards.

In April of 1989, as we frequently did, my mother, some of her work friends, and I went up to Mendocino for a spring break vacation. Along the way, we stopped at a grocery store and I begged and pleaded my mom to buy me a pack of cards. They were Topps rack packs, and I convinced her to buy a couple of them. Now, there's not much to do in Mendocino, so I spent a lot of my time sorting the cards - by team, by player, by card number... you name it, I probably sorted it that way. And that started my interest. That summer, I visited my first card shop (now closed) and really started learning about cards. Interestingly, I had never seen a baseball game before that point, so I went to my first game that summer (a Giants game at Candlestick Park), and soon became a fan of the A's, with Jose Canseco and Rickey Henderson as my favorite players.

The next few years were spent collecting as a kid normally would, mainly buying packs at a store, sometimes buying individual cards and small sets at the card store, Walgreens, and such (remember those small boxed sets that defined the '80s?). I moved from California to Georgia in 1992, and my habit grew via mail order from my favorite card shop. I would have boxes and supplies shipped from California frequently - whatever was new and fun. Eventually, I would buy a box of any card set I could get my hands on. I finished a few sets, but usually just had a selection of singles and inserts. I started college in 1996 and by then had also started a love of movies and music, and a small obsession with actresses like Alicia Silverstone. I still collected cards, but some time in 1998 I just burned out and stopped collecting. For five years, my only exposure to baseball cards was occasionally moving my collection around to condense it. At some point I seriously got into movie and other non-sport cards (which I had been collecting for a while, but only sporadically). Then, in 2003, I was back into collecting. Since then, my collection has grown and morphed into something I never could have imagined.

Today, most of my collection is still in Georgia while I'm in California, but I hope to fix that soon. Meanwhile, I continue to expand my collection. What that exactly is, I'll tell you about soon.