A few random thoughts for today. It was wet and rainy all day long, but I was on a mission.


I wanted to find some more rack packs of 2011 Topps. I've got pack fever, and I want to try to finish the set. There are three Targets (and no WalMarts) within about 10 miles of me, all in the same general direction, and they're all on the way to the nearest real card shop (Peninsula Sports Cards, in Belmont). Well, three Targets later, and I managed to find nothing. No rack packs, no blasters, not even retail single packs were left. They had been there - I saw them last week and bought a few - but weren't any more. This is the first year in at least a decade that I'm trying to put together a set essentially through retail packs, so this may be a common scene, but I tend to recall always being able to find cards available. Even when everyone wanted the manufactured patches when they first started packing them in blasters, and even when those mini cereal boxes came out (I did like those). Do Topps packs usually sell out like this? I'm wondering if selling out like this is going to hurt overall sales, mainly because people may have heard about the diamond ring stunt and baseball cards might be on their mind. 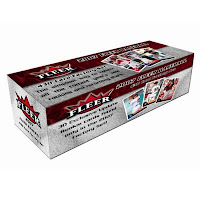 Anyway, I ended up at the card store and picked up a few things. The 50% off case didn't have much that interested me (Rafael Palmeiro autograph, anyone?) but I picked up a 2007 Fleer factory set. This was the last year that Upper Deck produced a Fleer set. I actually hand collated the 2006 set when it first came out, but prior to the '90s I never really tried to put a Fleer set together by hand. Plus, the factory set includes 30 extra cards. Picked it up for $20, which I figured was a good enough deal (original retail price $30). I needed some cardboard boxes, so I have 4 more 900-counts, and I grabbed two packs of Topps at $2.50 each. That's more than I usually want to pay but I wanted to rip something. Between the two packs I pulled four more cards needed to finish the set (including Pujols), a Kimball and a reproduction card I needed, and my fifth or sixth giveaway code card.

After getting home there were a couple nice packages in the mail - a 1999 Upper Deck series 1 set, and a package containing a 1990 AGFA card and 1995 Conlon TSN Griffey/Cobb card (both of those I need for one of my collections). The AGFA card is nice for an oddball, even if the logo was airbrushed off - the image is pretty good for a 1990 card. And the Griffey card is nicely done for a Sporting News release. Which reminds me, I still need to finish the 1991-1995 Conlon set - I finally found the last couple singles I needed to finish the first four series, but it's virtually impossible to find the fifth at all (save for some guy asking nearly $200 on eBay).
at 12:17 AM