It's been a couple days since I got something in the mail. I do plenty of business on eBay - it's easy to find the stuff that nobody's going to haul to a show, or stuff that can only be found regionally. (Or, stuff that I could find around here for way too much.) I want to get into the trading circuit, but most of my cards (especially pretty much anything worth trading) are still in Georgia, while I'm here in San Francisco. So, today's haul: 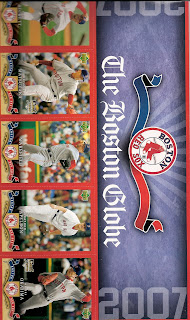 First, this Boston Globe Red Sox uncut sheet. From 2007, as if you couldn't tell. I'm still trying to figure out this scanner (I've managed to get it to scan documents to PDF, and I was able at some point to scan photos.) It actually broke off the bottom 1/3 of the sheet into individual image files, thinking they were separate photos. Good to know, I guess, if I want to scan multiple photos. (Strange, it didn't do that for the last image below, or the other cards on the sheet.) Backs are numbered 1-10, and this is a nice item to have as an uncut sheet - if I was a Red Sox fan I could frame this for the wall.

Second, one of the All-Time Heroes inserts from 1993. For those of you who don't remember, Upper Deck first released a 4-card "preview" set in 1992 featuring these T-202 Hassan style cards at the All-Star Fanfest. The cards featured Mickey Mantle, Ted Williams, and Reggie Jackson. The set was insanely popular back then but can now be found for under $10. In 1993, a full set was issued, including special insert cards. The only real difference between the set and the inserts was that the inserts weren't numbered. The fronts of the inserts are reprints of original T-202s while the backs aren't. The base cards feature more recent players (such as, again, Mantle, Williams, and Jackson), but also had some original players (Tinker, Evers, Chance anyone?). Anyway, I bought a box of this back in '93 and managed to put together nearly a complete set of the regular set, and I ended up with maybe half of the unnumbered inserts. Fast-forward to December 2010, I finally found the last few cards to finish the base set, but now I have the inserts to complete. I found this Jennings-Cobb and picked it up. There are only 4 inserts left now and I have completed the master set! 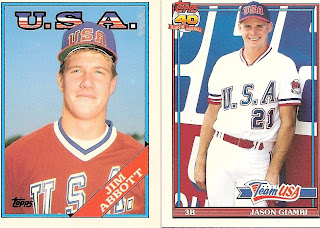 Last, and certainly least (okay, I kid) are these two team sets. I don't know why I like Team USA sets. It's not because of the rookie thrill. I've never really been crazy on that. Maybe because it's special, not one of the 26, or 28, or 30 teams, but it's still baseball. Anyway, I picked up the '88 and '91 traded sets (and a few more I'm waiting on) to mark off my list.
That's it for today! Hopefully tomorrow will bring even more exciting bubble envelopes.
at 10:24 PM