I've talked a bit about AKB48 on the blog in the past. But for those of you who don't know:

They are a Japanese idol girl group based in Akihabara. The main group has 48 girls, who are split into three teams, and then a couple "minor league" teams. There are spin-offs in other locations with similar formats.*

*Due to the pandemic, groups have been eliminating some of the sub-group teams. But that's not important anyway, now is it?

While they still exist today, they have fallen from peak popularity. AKB48 was biggest around the time I first arrived in Japan, about ten years ago. And with great popularity comes great card sets. Spin-off groups like SKE48 also got some card sets with similar designs and formats.

Two AKB48 sets were issued under the "Trading Collection" brand. The first one was a massive 264 cards, including short-printed foil, hologram, and foil hologram cards. The second set had 168 cards including short-printed shiny and clear cards. Both sets included multiple cards of each member for at least some of the sub-groups.

I got a large lot of cards from both sets, and I've been chasing after the missing cards since then. I managed to finish the first series first, three years ago.

Last year I made a big push to track down the remaining cards I needed for the second set, and I thought I had finished it after finding a couple cards online. But after sorting through everything, I realized I was one card short. 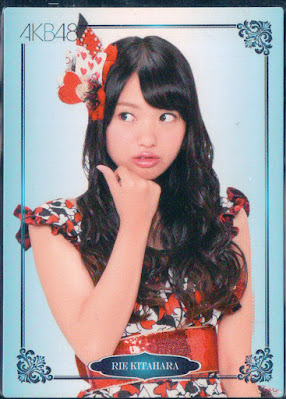 This card must have just slipped through the cracks. It isn't special by any means; it's not a short print and Rie Kitahara wasn't one of the most popular members, though she consistently performed on the group's main singles.

There are only a few shops to find these cards these days. So I tried the only one I know of in Tokyo, but they didn't have it. Luckily, someone listed it on Yahoo! Japan Auctions earlier this month and I got it for a reasonable price.

I'm definitely glad to cross this set off of the list! It is one of the few Japanese idol group sets I've managed to complete. And I probably won't undertake a similar endeavor again. I still have a handful of idol sets I'd like to finish off, though they are looking nearly impossible to find now. I will say that not finishing those would be disappointing, but not heartbreaking, because they are all over 10 years old and never were that special to me.