Don't expect this to be a regular series, but this particular card has a somewhat-interesting story behind it. Gaijin is a slang/casual word for foreigner. 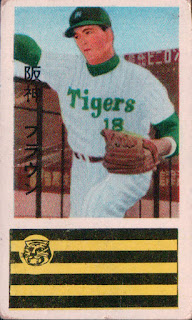 The player pictured above is Mark Brownstein. The card front calls him "Brown", a nickname of sorts given to him to make it easier to pronounce in Japanese. (Side note: Japan loves shortening names. For example, one major convenience store, Family Mart, is called FamiMa.) Brownstein was a star pitcher with the University of Southern California whose father did business in Japan. I guess he figured playing baseball in Japan would be a good opportunity to learn about the country.

The Hanshin Tigers signed Brownstein in 1962 fresh out of college.

This is a very rare occurence; Matt Randel and Carter Stewart are two other examples of Americans coming to Japan prior to playing in the US. Randel came over in 1999 after dropping out of college and pitched only 1/3 inning in 2000 before returning home for a couple seasons. He would then play for the Yomiuri Giants for two seasons before moving over to the KBO. Stewart came to Japan in 2019 fresh out of high school (thanks, Scott Boras) and has spent the past two seasons pitching for the Hawks' minor league teams.

As for Brownstein, he didn't do so well in 1962, never played for the top-level team, and left by the end of the season. He managed to make it on to three 1962 menko cards, though: this Doyusha menko, a Marusan menko, and a Marusan bromide. In fact, if I hadn't randomly came across this card, I wouldn't even know he existed.