Once or twice a year, something will come up and I'll learn about a rare event, unique occurrence, or obscure award, and I'll be inspired to start a new mini-collection of sorts. Last year, I put together a collection of MLB knuckleball pitchers and a collection of players who came from my schools or towns I've lived in.

Earlier this month, I posted about a player in the 1960s who never played with the top team in the NPB, but due to the fanfare around his signing, ended up in a few card sets. Mark Brownstein was the first American to sign with the NPB without playing in the MiLB or MLB. Only two other players have done this: Matt Randel and Carter Stewart Jr.

Yesterday, I talked about Alex Ramirez's retirement; Ramirez was the only active person I was collecting in the NPB at the beginning of the 2020 season. Well, in December, I found a copy of this card: 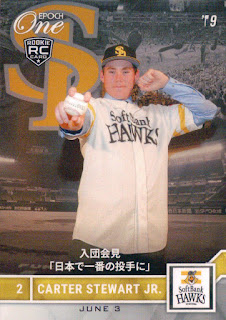 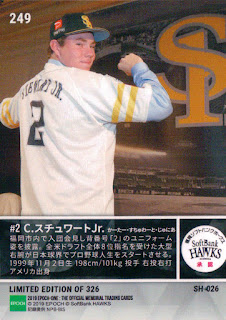 I should mention that I've been collecting Carter Stewart Jr. since the summer of 2019, but not for myself. I've been sending off the cards I find to a guy in the States. But effective about a month ago, I've also decided to collect his cards. I'm not going all-in on Stewart; I'll collect his base cards and perhaps some inserts, too. He doesn't really have many cards at this time anyway.

So hello, Carter. Welcome to my collection.