I'm in another new apartment. This is the fourth apartment (and fifth place) I'm living in during the past two months. As I finished up in Kiryu last month, I left that apartment and stayed in a hotel for a little over one week. Then, for one weekend (and later one week during the New Years holidays) I lived in my regular apartment. For about four weeks, I've basically been living in a somewhat-older apartment in Matsumoto.

That building has been somewhat neglected by the manager; the best example is that most of the light bulbs in the corridors are burnt out. And the apartment itself was a bit worn out. So they decided to put the new teacher in a different apartment here, but thanks to the pandemic and virus mutations Japan is closed yet again, leaving me here for the next whatever months.

Since I'm still here, I had to move to the new apartment yesterday. I'm definitely tired and sore one full day later, and I didn't realize how much stuff an apartment really has, but we still got everything loaded in a car and truck in less than an hour, and unloaded even faster than that. And I was able to unpack and organize everything in one night.

And so I'm in my fourth apartment, all settled in, and getting back into handling some personal business. I've been (finally) going through my scans I've been accumulating since last spring, and here's one I forgot about from a couple months ago: 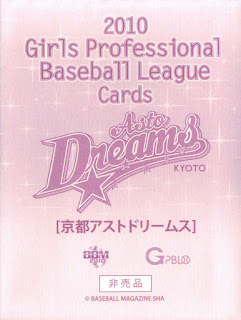 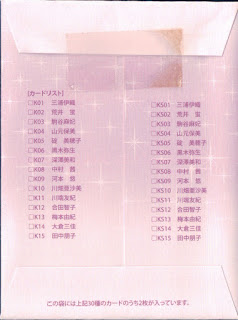 No cards here. In 2010, BBM issued some cards for the new Girls Professional Baseball League. I don't know exactly how they were distributed, though I think some were probably included with fan packs, as that's where this one was.

There were two teams in the GPBL in 2010: Kyoto Asto Dreams and Hyogo Swing Smileys. I have a few cards from both teams from this issue, but never really knew how big the sets were or what the checklists were. Now, I do.

Each team had a fifteen-player roster in 2010, and BBM included each player in this set (or pair of sets). There are two versions of each card, one regular and one printed with a shiny foil finish. Cards issued in 2010 have a K- or H- prefix to match with the teams.

The 2011 BBM set numbered the entire issue in one series and was expanded. But that's a post for another day.

And I'll probably return to this set again in the future when I have more cards; I only have about a dozen of the 30 cards issued in 2010.