Say hello to the oldest Japanese card in my collection.

In fact, it doesn't get much older than this. Baseball's first professional teams formed in the 1920s, though the first real professional team (which would become the Yomiuri Giants) wouldn't form until 1934. Before that, most baseball was played by high school and college students. The Koshien high school baseball tournament started in 1915, with the spring version starting in 1924. The Tokyo Big6 Baseball League (college) was established in 1925, though college baseball was big for more than 20 years prior.

The first identified bromides in Engel's guide come from 1930, with all pre-war sets consisting of college players or US players from the Japan tours. It's definitely possible that cards were issued before 1930; in fact, I'm pretty sure they have been, but just haven't been cataloged yet.

And that puts us with this card here: 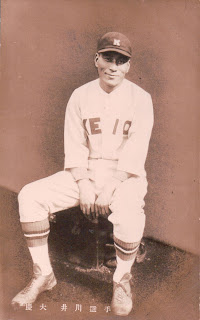 The card above is identified as JBR 71: 1931 Yakyukai Magazine Sepia Bromides. Cards were included in the February 1932 issue of the magazine inside an envelope, and came blank-backed. The bottom text has the school name, player's surname, and position, from left to right. The card measures 3-3/8" by 5-3/8". Three cards were in the set. The card I have above is Kiyokazu Igawa, from Keio University. The remaining players are Osamu Mihara from Waseda, and Takeo Tabe from Meiji.

Yakyukai Magazine was issued for a very long time - from late 1911 through October 1959, it appears. Only two sets of bromides are listed in the Engel guide from the magazine, however: this one, and one for the January 1934 issue. The image above is the February 1932 cover. I'm not sure why Engel calls this a 1931 card, though while the cover date is February 1932, the magazine was possibly on shelves just before or on New Years.

Finding information on Igawa isn't easy. It appears he might have participated in the Koshien Tournament in the 1920s, and more famously, I think he was partly involved in what translates as the "Apple Incident" on October 22, 1933. While it seems that rivalry has caused problems for a long time, this particular event, involving the throwing of trash, including an apple core, was the impetus for creating specific cheering sections for fans.

To this day, sporting events have "cheering" sections where only that team's fans can enter; for smaller matches such as independent leagues that just means sit on your team's side, while NPB stadium rules basically prohibit entering another team's fan area (if you're wearing a Giants jersey, you aren't allowed in the Tigers fan area, and vice versa), and these fan areas can be fairly well "fenced in" to prohibit infiltrating enemy lines (and keep people from sneaking into more expensive seats).

Odd note I discovered while preparing this post: the Japanese version of Wikipedia has a page explaining what a strike is in baseball. The page's photo shows Barry Bonds from behind home plate as an umpire calls a strike.