The Idiot Box on Cardboard?

Back during the last snowy season, Corky of Pack War asked on one of his Monday Question Days about pop culture. That sounds right up my alley.


Is there a television show that you watch and would like to see a trading card set built on?

He mentions Futurama, which is one of my favorite TV shows. I could definitely latch on to that idea! There are so many concepts to turn into subsets or inserts, too. In addition to 140 episodes and the movies, there are at least 60 characters and plenty of themes. Fashion, technology, planets, spaceships, food, language, inside jokes, and opening credit gags. Plus the comics and video games. Autographs and sketch cards would round out the release.

There are plenty of old Nickelodeon shows I'd love to see on cardboard. Some of them may have made appearances in other sets before. But how about Clarissa Explains It All, The Secret World of Alex Mack, You Can't Do That On Television, Hey Dude, Salute Your Shorts, All That, The Amanda Show, Double Dare, the Nicktoons that don't have comprehensive sets already...

There are also some really obscure Comedy Central shows, like The Sarah Silverman Show, Ugly Americans, and Drawn Together.

Community might make for a fun card set. Robot Chicken? Boy Meets World and Girl Meets World.  Kids in the Hall. What I think would be really great would be a series of card sets featuring all of the greatest TV shows from each decade. Perhaps a nine-card set for each show. Some sets just don't work as a full release, but this would be a great chance to bring back Silver Spoons, Punky Brewster, Mister Ed, and all the other shows of the past. I'm not sure how possible relic cards would be, but there are lots of autograph opportunities. 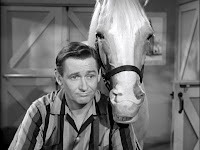 And that same concept would be great for movies and music... but today's post is about TV.