I'm separated from my cards and the ability to scan for a while, so unfortunately you're stuck with me making idle chatter. But one card I scanned a few months ago brings to a close one of the more challenging BBM sets.

The last post I made before my disappearance was about a set that was nearing completion, and a couple months later, I finally got this card: 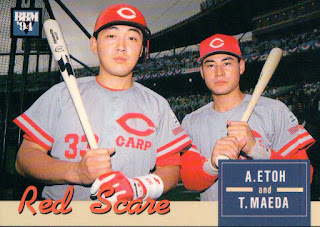 The Carp are always a popular team, and Maeda and Etoh were big names back in the 1990s. So it makes a bit of sense that this card would be tough to find. How about that card title? Red Scare?

With that card, the 1994 set is complete. The other big BBM set is 1995 - it's the largest single-series set at 651 cards, and most expensive, with a "book" value of about $550. I haven't started that set, and might not. The set doesn't seem to have any super big-dollar cards in it (I could be wrong... I have no price guide in front of me), but the overall size plus short prints is where its value lies. Of course, the set has plenty of Ichiro and Hideki Matsui cards. As for other BBM sets I need, those, too, are tough to find, though not as pricey. However, my eyes are open for deals.

While I don't have scans of other sets (see above), I have had a good bit of luck picking up some recent Calbee sets.