I've been posting quite sporadically lately. I've just been busy, as always, of course. I intended on shipping out a bunch of trade packages and such over a month ago, but the pile of cards is just waiting for me. My weekdays/nights are generally full as I find myself working about an hour of overtime every day, and I've been dragging in the morning too.

Weekends aren't much better, because I am in a period of six weeks were something special is happening for work on five of them; this weekend is my only break but I'll still be doing "work" things as I'm helping my coworker clean her apartment - for a delicious cheeseburger and a banana split, of course.

So while I have stuff to post - Calbee history posts, a few new things here and there - I haven't been to a card shop in a few weeks and a lack of time and energy makes it real hard to push the keys.

Oddly enough, I've been trying to get my card fix through other means. One of those is by buying bags of Calbee chips with the baseball cards. I've bought a few bags for myself at the same time I've been picking up packs for Fuji. Here are a couple packs of cards. And by pack, I mean bag of chips with a pack of two cards super-glued to the back. 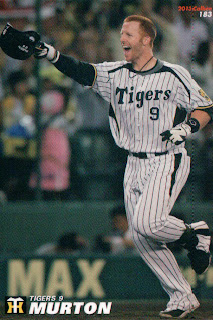 For a base card, I was pretty happy to get Matt Murton. He's one of the better foreign players over here and as such is pretty popular. Coincidentally, I dressed up as a Hanshin Tigers baseball player for Halloween this year. My students tell me I look like Randy Bass: 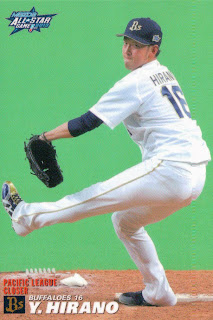 I pulled two All Star Game subset/insert cards in my two packs. Hirano plays for the Buffaloes. 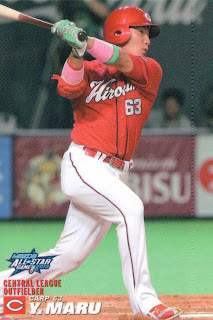 Maru plays for what might be my favorite team, the Carp. If only I could have found a Carp jersey. The Tigers one I have is road grey with only Hanshin across the front. 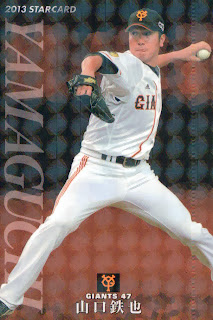 I pulled one real insert, a Starcard of Giants pitcher Yamaguchi. I'm not sure why, but I've had better luck this year pulling inserts than in the past. Granted, I haven't bought many bags of chips to begin with, but it's nice to spend less than 100 yen and get a couple cards I need instead of spending 200-300 yen in stores per card.

I opened a few more bags but I haven't scanned those cards yet. I might get to that eventually... if only I have more time!
at 8:01 AM