A few teams have had some boxed sets this year that weren't issued by BBM: Carp, Lions, BayStars, and now the Buffaloes. 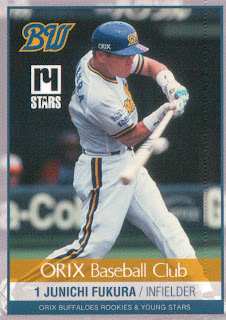 The Buffaloes set is made by the same company that released the Lions and BayStars sets, as all contain the same "ry STARS" logo you see on the front and back of the card. The company has played with the set design over the year; I think the Lions received one single card design, the BayStars had several designs, and the Buffaloes have just one (with a variation). All the cards feature the team logo at the top with the "ry STARS" logo beneath. The bottom of the card has a three-line banner with ORIX Baseball Club or ORIX Buffaloes, the player's jersey number, name, and position, and finally the name of the set. Members of the 2013 All-Star team are noted on the fronts between the team logo and ry STARS logo. 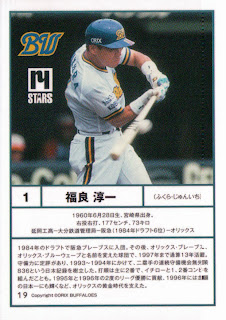 The backs have the same photo as the front in the upper half, with a long write-up at the bottom. Cards are numbered in the lower-left and say "Copyright ORIX BUFFALOES" but they do not have a year or manufacturer information.

The autograph issues break down as follows:


Note that blue ink versions might replace the black or red ink versions; it's difficult to tell. With 27 autographed cards, I think everybody appears in the set on one autographed card; the All Star members have second autographs on the two combo-signature cards, and the Legends only have combo autographs.

It appears the manufacturer of the set is named Frontier International.

The boxes are quite expensive for a small set and a single autographed card, though I guess buying a case would possibly give you a hot box or two and I'm guessing that a couple good pulls will net bulk buyers a decent profit - a single-digit serial-numbered dual-legend autograph card will bring big bucks in Japan.
at 7:51 AM