In late August, BBM released a box set for the rookies and younger players on the Seibu Lions. It wasn't until mid to late September that I finally picked up a few cards and now, a month later, I'm finally posting about the set. Given the quantities of all the insert cards and autographs, 3000 sets were printed overall. In typical fashion, each box contains one complete base set plus one of the special cards. The suggested retail of each set is 4200 yen; autographs fall one in every three boxes on average. 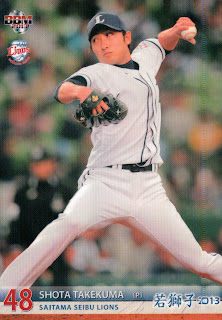 There are 27 cards in the base set. They have a design similar to the Lions set this year; a Young Lions 2013 logo is at the bottom. All 27 cards have the same design with no subsets. 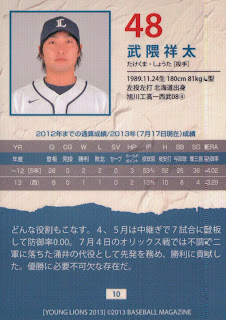 The backs have the traditional BBM layout. Statistics have career totals through 2012, and 2013 statistics through July 17th. The copyright information identifies the set as Young Lions 2013. 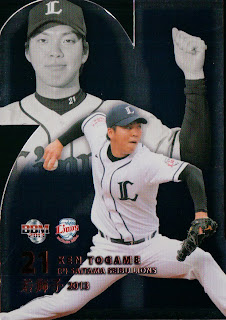 There are a few inserts in the set. One is a die-cut nine card set. Each card is die-cut to the shape of the player's jersey number; the fronts have the typical foil background. Here you see the rarer red-foil-text version. 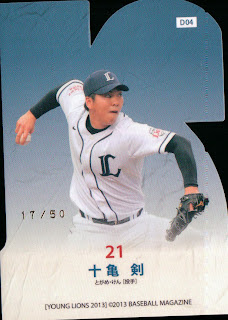 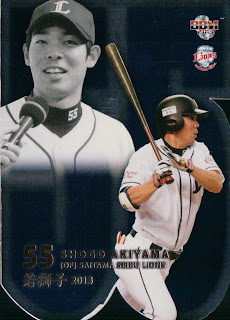 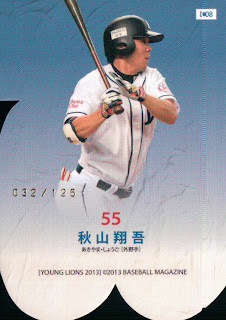 The gold cards are numbered out of 125.

There is a three-card Photo Card set. They have a very large border, typical of BBM photo cards. Two of the cards are serial-numbered to 145, with the third numbered to 146.