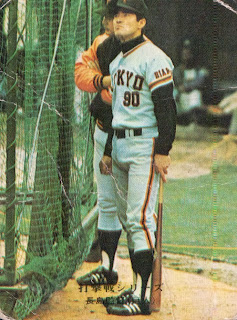 Calbee's next set was issued over two years, starting in 1974 with card numbering continuing through 1975. Then, at some point in 1975, they started numbering over again for the next issue. All cards in the 1974-75 set seem to have the same layout on front: borderless photos with one or two lines of text at the bottom in either black or white print. 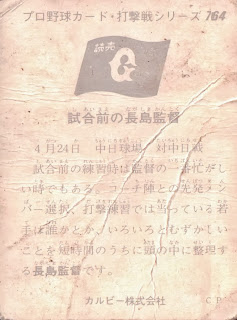 The backs all seem to be essentially the same as well; "Pro Yakyu Card" and the series name appear across the top with the card number, followed by a waving team flag (some cards have two waving team flags). All the backs are grey. Cards issued in 1974 don't have a specific series name, but do list the year 1974. 1975-issued cards have no year, and instead have the actual short-series name.

There are several series in this release spread over two years:

Note that according to Engel there are supposed to be 21 series but I only list 17, using the series breakdown from a Japanese collector. Some of these series splits seem to be ambiguous; cards 1-288 all seem to have the same design; likewise, the First Place Battle Series cards could be considered one series.

The latest edition of SCM (as of this writing) that lists Calbee cards puts the commons at 500 yen each; cards issued in 1974 carry a premium over 1975 with the first few series carrying a much higher premium. Of course, card values aren't always reliable, especially with vintage cards.
at 8:17 AM