BBM seems to have released more box sets this year than last, but I haven't really checked for sure. One of the many team box sets to be released lately focuses on the Carp stars. 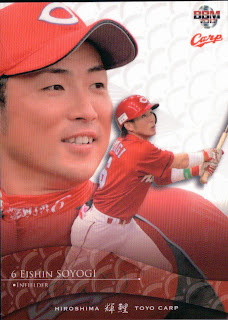 There are 18 regular cards in the base set, all with the same design seen above. Team colors and fish scales are very prominent in the set. 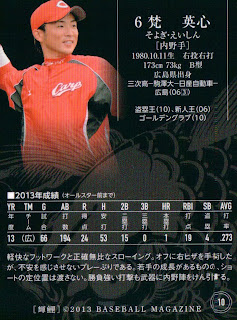 Backs continue the carp design with black backs and the usual statistics and write-up.

Each box set contains three random special cards. These all seem to be either relic or autograph cards. There are various versions of memorabilia and autograph cards, and I think all 18 players have relics and autographs. Despite the always high price tag on boxed sets, this might be one of the better deals, as you have a better chance at a good hit - there don't seem to be any photo cards or other non-relic/non-auto special cards in these boxes. 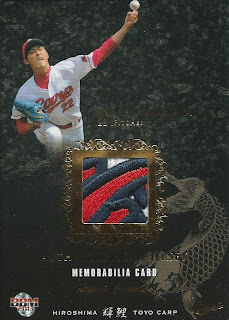 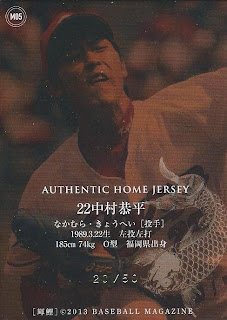 Jersey cards have patch versions (#/50), some with very nice patches!

All 18 players apparently signed for the set, and there are two versions of each autograph.

Vertical versions are serial numbered between 20 and 40 copies.

Horizontal versions are serial numbered between 14 and 70 copies.

Twelve OB (retired/legend) players have autographs in the set; they appear to be sticker autographs using the same autograph card designs, but with golden colors instead of red, white, and black.

Vertical versions are serial numbered between 10 and 50 copies.

Horizontal versions are serial numbered between 20 and 100 copies. Yes, it seems like there are exactly twice as many horizontal cards as there are vertical cards for each player. (This does not hold true for the active players.)
at 7:14 AM