The Nippon-Ham Fighters got their start back in 1946 as the Senators, joining the professional leagues as the Toei Flyers the next year. They have changed hands a few times over the years, but they called Tokyo their home through the 2003 season. Several stadiums were home to the team over the years - Korakuen Stadium (home to the Giants) twice, Komazawa Stadium (rebuilt in 1962 as a football/soccer stadium for the 1964 Olympics), Meiji Jingu Stadium (current home of the Swallows), and the Tokyo Dome (current home of the Giants). However, Tokyo is packed with teams - today there are five pro teams in the metro area, including Saitama, Chiba, and Yokohama. The Fighters shared the Dome with the Giants and had always been second fiddle, plus the rent was quite high.

The Fighters, owned by meat company Nippon Ham, became the Hokkaido Nippon-Ham Fighters in 2004 after moving to Sapporo. They now play in the Sapporo Dome, which opened in 2001 and was used in the 2002 FIFA World Cup. Ten years later, the Fighters still call the Dome their home, and this September it became NPB home stadium number 12 on my list, completing my stadium journey. 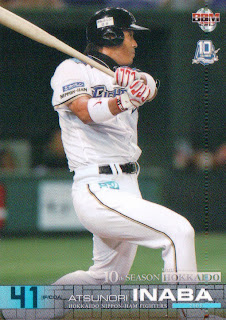 The base cards remind me of Sapporo Dome - it is quite grey and blue. There are two subsets, the three-card "Great Sensations" with the three most important Hokkaido Fighters players, and a 14-card highlights subset. Card 90 is a checklist with the mascots pictured on front. 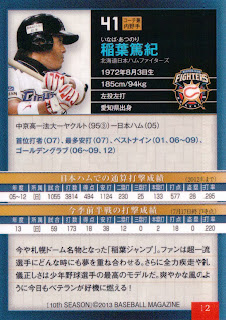 Backs of the regular cards use the usual base design, including partial 2013 stats for active players. The card set is identified by the [10th Season] notation on the copyright line. 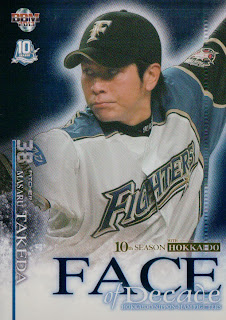 The lone insert set is called Face of Decade, basically a Best Nine (All-Star) team for the past decade. 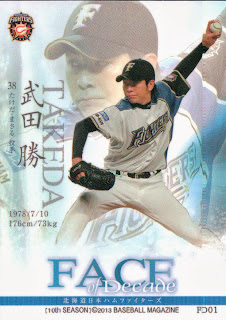 Three jersey relic cards were inserted into packs with Kaneko, Nakajima, and a Kaneko-Nakajima dual relic. I haven't seen any in person so I don't know of any parallels, though BBM's preview images show they have red facsimile signatures on the front.

Of course, sticker autographs are also included in the release, with 42 players and three mascot autograph cards. Player autographs are serial numbered from 10-120 copies, and mascots have 30 copies each.

I think NPB Card Guy is going to post about this set very soon too, so maybe he'll leave a link to his post at Japanese Baseball Cards in the comments below once he posts it...
at 5:27 AM