The semi-local Mega-Donki store has had super-discounted packs the last two times I've visited. At only 10 yen each, I'm willing to buy anything. There is a limit of five, though, per item per person per day. I only bought two of these starter boxes (why didn't I buy more?) which originally retailed for about $30.

As you know if you've been reading this blog, AKB48 is the biggest J-Pop group in the world, and the fans can be downright insane. With great popularity comes great amounts of merchandise, found for the group as a whole as well as plenty of goods for individual members. What you see below is the AKB48 Trading Card Game & Collection Trial Deck. It's advertised as "Volume 1" though I've never seen a follow-up (this came out in 2012). 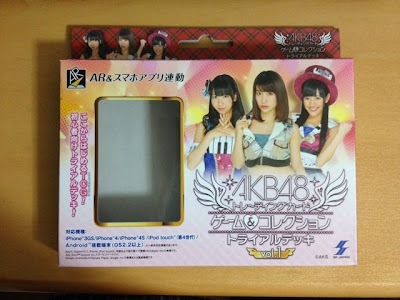 The empty box, above. The top card in the pack shows through the window. My favorite member, Mayu Watanabe, is wearing the hat. Those three girls are special in the game. 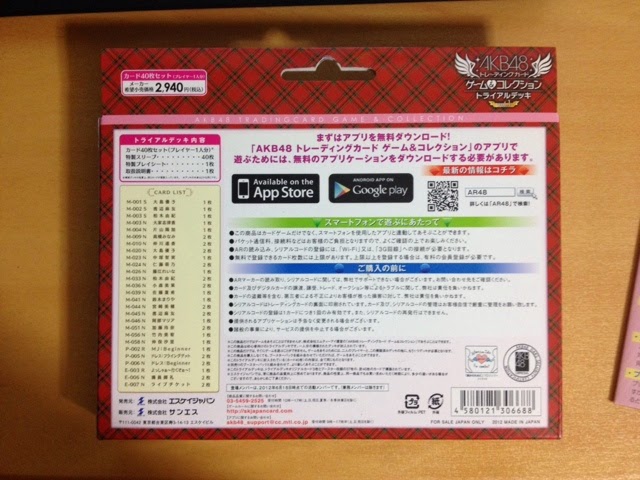 The back describes a bunch of details about the cards and how to use them in an online game. The checklist of cards included is listed on the left; there are forty cards, forty card holders, an instructions sheet, and a game mat. As mentioned in the actual checklist, some of the cards are duplicates in the box. I guess you can clone idols in AKB48 game world. 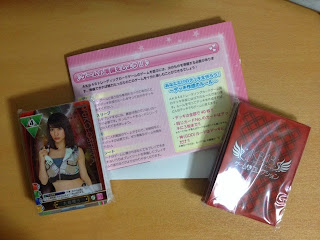 Here are the contents of the box. The card sleeves on the right (special ones with AKB48 logos!), and the cards on the left. I mentioned the three girls on the box cover are special: they each have one card in the box which can only be found here, and not in the booster packs.

I don't know how the game works. It involves an app of some kind, with codes found on the backs of the cards. I'll eventually get some help to explain this to you all! I also bought a full box of booster packs at a big discount, and I'm two cards away from a full regular set. Again, those full details will come at some other point in the future.
at 3:00 AM