Let's look at another pack of Triple Play, shall we? I like this product a lot. Here's number two of five. 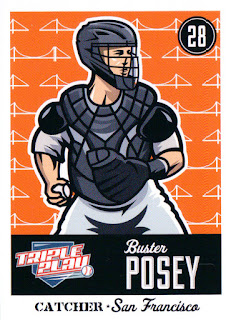 Buster Posey is a good start. The sue of the Golden Gate Bridge in the background adds a nice hometown touch. 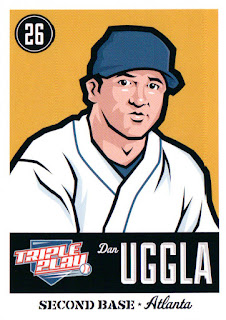 Dan Uggla looks like a high school kid here. With a massive Adam's apple. Is that accurate? I'm not sure why they chose that color for the background - shouldn't it be a certain shade of red? 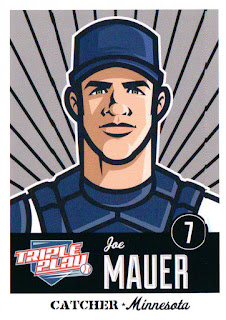 Those rays coming from Mauer's back are actually pretty-well done. Mild-mannered Joe Mauer works as a modest cashier at his local mom and pop grocery store by day, and is a model citizen in the community. But by night... he's SuperCatcher! Ready to block wild pitches at a moment's notice! Faster than a base stealer from home plate to second! Stronger than a runner during a play at the plate! Smarter than a batter when calling pitches! 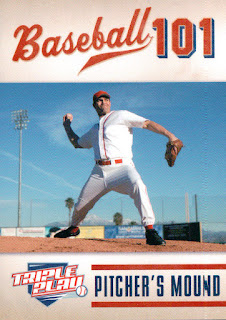 Who is the man pictured here? Where was this photograph taken? I like the idea of this subset, by the way. 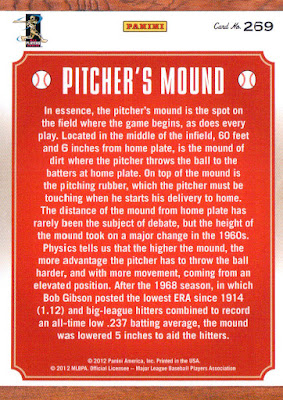 There is a lot of words on the back of the card! And if this is meant for children, perhaps they should have run it by a first grade teacher. Not many kids know the phrase "in essence" - even most high schoolers. I would also like to have seen (or see in the future, if this brand continues) more obscure rules and terminology. Most collectors should know what a pitcher's mound is. How about worm-burner? Meat? 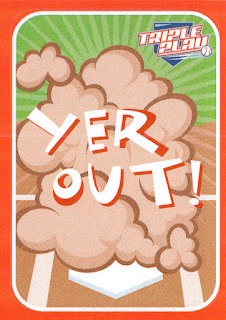 Hey! A play at the plate card! Either that, or the genie is about to appear. This is another fun sticker without a player. 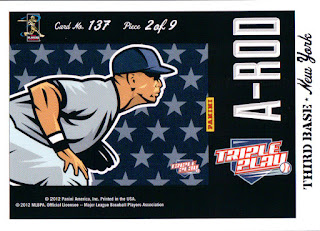 We've reached the last two cards in the pack, which means it's puzzle time. A-Rod looks very determined. Why do the Yankees have stars? Are they that special? Couldn't Panini have used images of the Statue of Liberty? (Yes, I get it. Yankees - Americans - Stars and Stripes.) 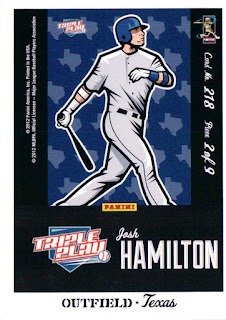 The Rangers get the outline of Texas as a background. Josh Hamilton has a nice action card. 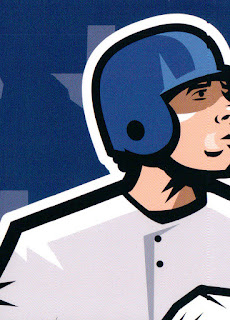 Extreme closeup! This is the back of a puzzle piece. Exciting, huh?