If you've followed my blog and read my posts enough, you know that while I enjoy getting vintage cards from sets I don't have, I've not really purchased vintage cards for the purpose of building sets. I plan on putting together old Topps issues eventually, but my TCIC sets have taken priority - there are 125 sets waiting to be completed. Not to mention the Diamond King sets, Baseball Heroes sets, and the player and awards/leaders collections. I still haven't finished my 1997 Upper Deck set! I need card 417, and can never find it. But I digress.
The first table I saw when I walked into the show last weekend was covered with 5000-count boxes. The fronts of the boxes had labels on them indicating the cards were 25 cents each, right up my alley. So I started lookin through for inserts and oddballs I could use. At some point through the first box this kid behind the table told me they were 50 cents each, and I kind of ignored him and kept going. I noticed some standees on some of the other boxes identifying them as 50-cent boxes. Eventually dad came over and I asked him about the quarter boxes, and he said "yeah I just bought all these from someone else and haven't had a chance to change the labels." He said he'd honor the 25-cent price for me, so I kept going with the hunting, and probably spent nearly an hour there.
It's nice (and good business practice) that the dealer honored the quarter price, but I don't see him getting many sales at 50 cents each for most of the cards in the box. I saw a lot of junk wax base singles in there that he'll be lucky to sell for a nickel. He did have a section where several vintage cards appeared. Most of these are in poor condition, most with rounded corners, many with creases, and several that show signs of being glued to construction paper. But I figured for a quarter I could grab them and figure it out later. 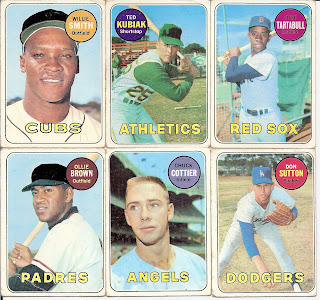 I didn't even look at names while I was pulling out the vintage, so it was cool to come home and see I had a card of the great Don Sutton.

Some years there was only a single card in the box, but I picked it up anyway. 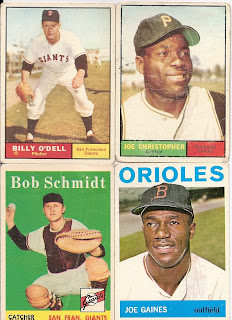 While I haven't decided what I'll do with most of these cards yet, Joe Gaines is already headed out in a trade. 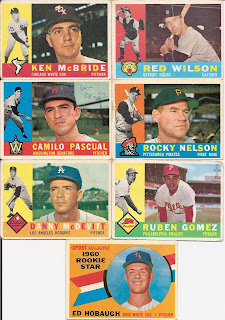 The 1960 Topps set is crazy colorful. Five of these cards were the ones with the construction paper backs.

I really don't know what I want to do with these cards yet. If someone wants some well-loved vintage, I'll trade them for cards I need. Otherwise, I'll hold on to them until I finally start building vintage Topps.
at 3:17 PM