Released on June 17th (okay, not so new anymore?), the Epoch BayStars team set follows the same format as its others: cheap packs (about 250 yen for four cards) with a small base set, a few foilboard inserts, and some rare autographs obtainable by point cards. 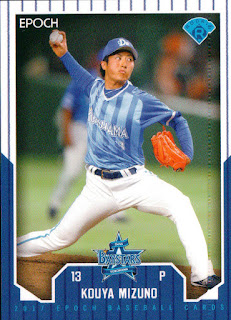 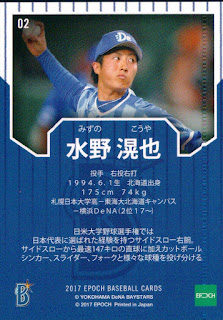 I believe the BayStars set is the most attractive of the team sets so far. The Hawks set was nice, but the blue and white pinstripes that match the uniforms are really cool. Here you can also see Epoch's Rookie logo. The base set has only 27 cards. 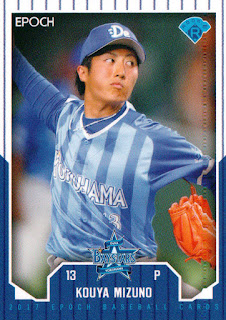 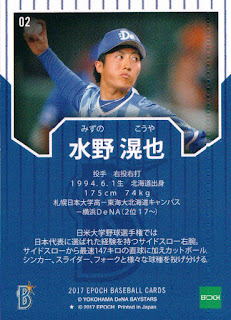 One-star variation: crop. The picture is cut much tighter. And you can clearly see the single star on the back of this scan, since Epoch didn't use a black border this time! (Note to card companies: solid white or black borders frequently get cropped depending on the scanner model - some sort of border design really helps.) 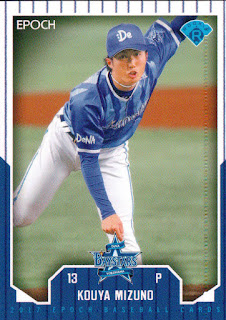 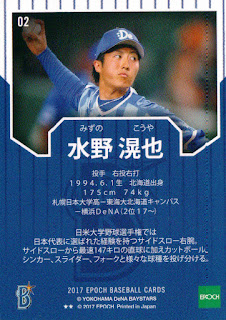 Two-star variation: photo variation. Note that the back photo remains the same. 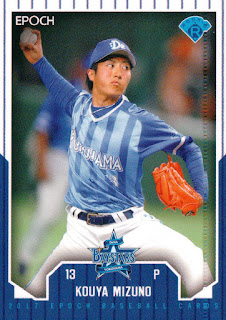 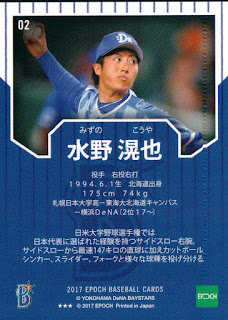 Three-star variation: The half-crop from the original photo. 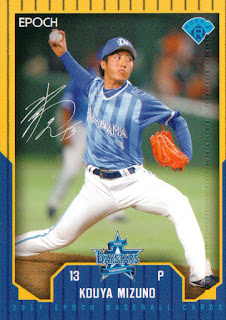 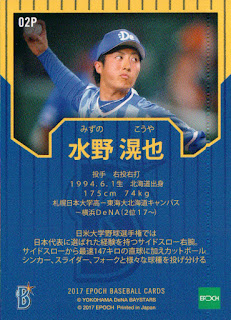 Printed Signature parallels have yellow borders. There is a six-star Signature parallel, which uses the photo variation.The yellow and blue borders look really cool, too. And they remind me of my high school team colors. Go Eagles!

Here's the breakdown of the base set and variations:

As usual, Epoch has a line of "Holografika" foilboard inserts as follows: Sluggers (8 cards), Hurlers (10 cards), Rookies (9 cards), and Combos (9 cards). The combo cards feature only one player, but use two photos.

And as mentioned above, autographs are available with the submission of 100 points found randomly in packs. Ten different autographed cards were produced.
at 7:03 AM