What is the ugliest card set you've ever seen?

But they're all stuck in America, showing American baseball cards, with American baseball players. And while I could look through my US type collection cards to find some ugly designs, I thought I'd take a look at the cards I've found in the past six months here in Japan. So you won't see any Topps, Upper Deck, or gaudy Fleer, Score, or Donruss from the junk wax era.

Finding oddballs isn't easy here. They just disappear into the ether once they're issued. But there's a good bit of BBM, Calbee, and game cards to choose from. Let's take a short look at some of them. 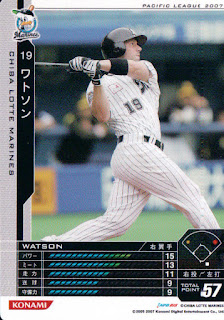 Game cards just have too much going on with them. There's a ton of data on both the front and back - Japanese game cards these days work with games in arcades or online so the back has even more space for more skill charts and stats. Plus, any particular company's game cards have the same design, with just minor differences between each game (mainly a different logo hidden somewhere on the back). Each series is identical to the ones before it, and several series are released each year for several years. One game is on its 11th or 12th series so far.

As a collectible for baseball fans, they have nothing going from them. I understand they're designed for another purpose, though, so they just receive honorable mention. 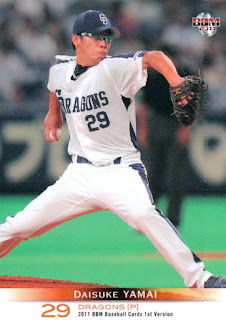 #5: Most BBM flagship (1st and 2nd Version) issues from the past 10 years or so. Looking at the card above, you might say "There's nothing wrong with the design." Well, I suppose not - the text at the bottom doesn't take up much space, and most sets have players' names, positions, teams, and even jersey numbers. Plus I really appreciate the inclusion of set names on the fronts and/or backs of modern BBM and Calbee releases. So what's so bad about BBM? The designs follow the same basic idea: some computer-generated basic color bars of some sort with an action photo. There are no standout designs in regular BBM sets - and most of BBM's other issues follow suit with the base cards. There's a design on this card, but it's almost the same feel every year. What about Calbee? Sure, Calbee has the same design, but Calbee cards have a different feel - photo-focused with no design elements to distract from the picture. I've mentioned before I like sets with minimal or even no design, and I'm glad Japan has one (and it only needs one). 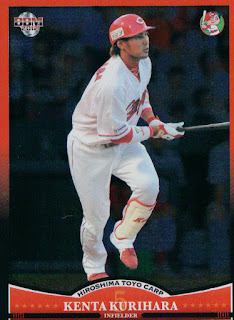 #4 BBM Parallels. When you're the only game in town, you're going to end up on this list several times. Sorry, BBM, you just have so little competition. All the team issues this year have foil parallels that seem to have no extra value over the base cards. Plus, I don't care much for foil parallels like this. Many teams have something going on (the Giants team issue has a giant silver G logo on the gold foil background). I've seen foil signature cards for other BBM issues which I'm happy with. But those are tougher to find, and thus have value over the base version. 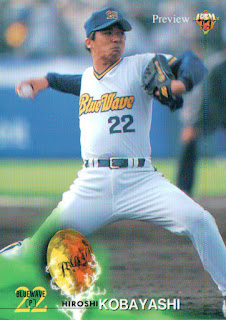 #3 Who put a giant gem on my baseball card? I think this set led to the safe, relatively bland designs I've seen on BBM issues lately. The golden cut stone stuck in icy ivy-like growth inside a cloud of green smoke seems like something inspired by that bad Batman movie and plenty of creativity-enhancing substances. This was BBM's regular issue design for 1999, and as far as BBM goes it's their worst flagship base set design. 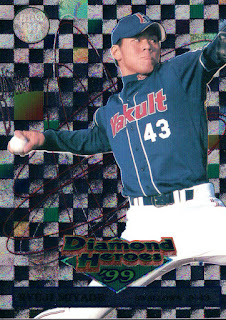 #2 The 1999 design team at BBM must have been hired from the mid-1990s Fleer design team, because both the prior card and this Diamond Heroes issue look like something that would have found its way into a Fleer/SkyBox product. Lots of seizure-inducing silver metallic squares are cluttering up the background. What's up with the random color squares? And was this a rejected design? Perhaps it was scratched out with that red pen, and instead of being discarded, it found its way to the printing presses. Diamond Heroes was BBM's premium issue. 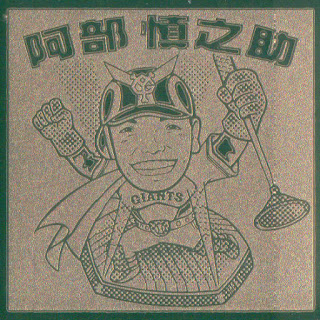 #1 BBM is saved from the most hideous offering I've seen in my short stay. Sure, the scan has promise. It looks like there's a fun comical line drawing of some player on the Yomiuri Giants.

But he has boobs. And he's holding a plunger and apparently wearing rubber gloves. And shin guards (I guess he's a catcher). And he's Godzilla-sized. Plus, I think he has tattoos. He's wearing a cape? Is he the Giants version of a toilet-fixing superhero? Is he Mario from the video game, but if he left plumbing to become a baseball player, but never lost his love of clearing the most stubborn clogs?

I like the cartoon. It's fun. But this little line-art drawing is etched into a little gold foil sticker, so nobody can really see it. Frankly, I'm very surprised it scanned. And that's why I think it's the ugliest Japanese issue. This is a 2008 issue by Lotte (the company that owns the Chiba Marines and sells lots of chocolates and other food goods). The cards/stickers were found inserted into these chocolate cream filled wafer things from 2006-2008. There are stickers still being made somewhat similar to this, most recently seen when I went to Fukuoka: 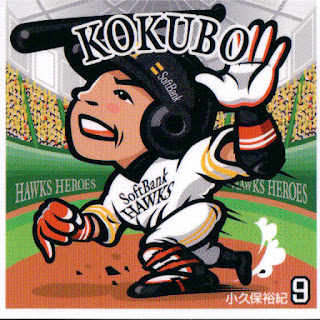 This came in a package with a chocolate wafer candy, but doesn't have any manufacturing information (copyright on back is for the Hawks). These are certainly tamer, but fun.

The funny thing is, the cartoons issued by Lotte from 2006-2008 that aren't gold foil-etched are pretty good, even if they're on a foil background too. 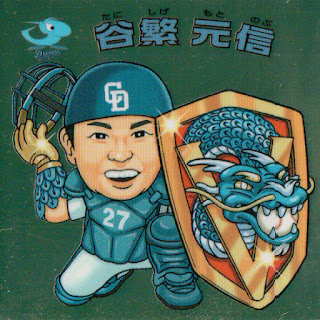 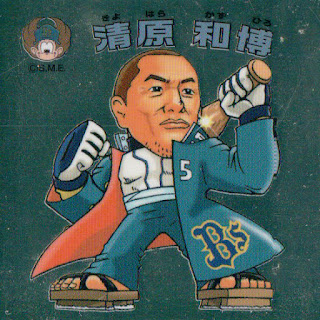 Barry Bonds if he played for the Buffaloes and batted while wearing sandals. 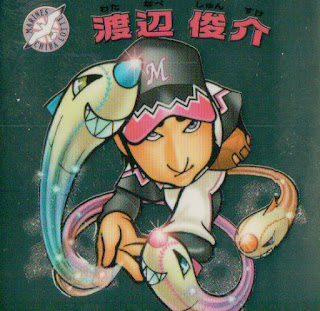 And some Marines guy who pitches missile baseballs of different colors.

The gold foil stickers just don't look good. Granted, they aren't vomit-inducing, but line art cartoons and foil really shouldn't be mixed. And that's my opinion! There are plenty of boring designs, and some really gaudy inserts too, but I excuse inserts since some of the craziest inserts are also the best. No, parallels aren't inserts.

Hmm, now that I think about it, I might need to try to put together the Lotte stickers sets because of the awesomely wonderful cartoons. Yeah, that'll be easy. Yep.
at 9:03 AM