Today, my coworker Amanda joined me for lunch for my favorite meal - spicy curry with stewed chicken. She's an adorably lovable little sister to me. I took her under my wing when she arrived and I know I've gone way out of my way to help her these past couple of months. But I enjoy helping her and hanging out with her can be fun, partly because you never know what she's going to say or do. I should start writing them down and keep a list of Amandisms.

But back to lunch. We were looking at the menus and she mentioned how the item on the menu she wants the most is really expensive. Then she says "I don't want to blow my wad."

Okay, some of you probably already realize that she meant spend a lot of money. But I had to explain to her what else that term meant.

What does that have to do with baseball cards? Well, Fuji was inspired to ask:

What's the most you have ever spent on a single sports related item?

I'm a cheapskate when it comes to cards. I rarely spend double digits on single cards. But I've spent $50 twice on individual cards, both of which remain the most I've ever spent on a single sports-related collectible item. I'm not counting wax boxes and complete sets.

What did I buy? Wouldn't you like to know! Actually, both cards are autographs from two of my favorite players. 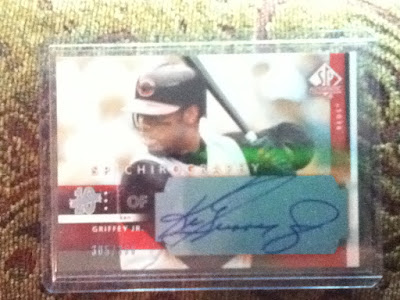 I might have spent less than $50 on this card. Actually, I might have paid as little as $20 for it (it's a pretty-high numbered card). But somewhere in my mind I attached the $50 price tag to it. It's a great autograph of Griffey Jr, although he's pictured with the wrong team (he's always a Mariner in my eyes). 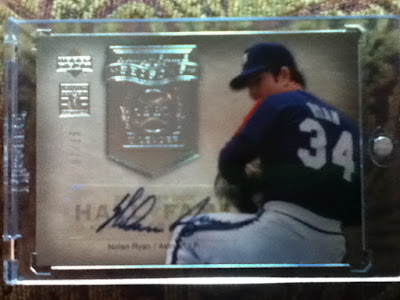 My prized possession is this sticker autograph of Nolan Ryan, numbered to 15. And for $50, I got a great deal. Again, he's pictured with the wrong team, as he was traded to the Rangers when I started collecting cards. I'm still really happy with it!

While I don't splurge on individual cards often, and I rarely buy boxes anymore, I've made a few sales greater than $50 for individual cards. My first really big sale was a Cal Ripken insert card from some premium issue in 1995, pulled right around the time he was about to break Gehrig's record. It was booking at $100 and selling by dealers around $150, so I managed to get the full $100 bill for the card. I also did quite well selling off my non-sport hits (dangit, I wish I kept most of them), as some of them that I obtained for $10-20 from a case-busting dealer ended up being short printed and thus reselling for as much as $200. I've worked hard to rebuild that collection (though not all the same cards are back in), and I'm wise enough now to not sell the cards I still have. Most recently (about 2006 or 2007), I managed to pull a Griffey Jr. Bazooka-backed mini from Allen & Ginter which I sold on the 'Bay for $75. That's the last card I sold on eBay to date. Go figure!